IN A WELL PLAYED GAME, THE O’s BREAK A 5-5 TIE IN THE FINAL INNING TO PREVAIL OVER THE ROYALS 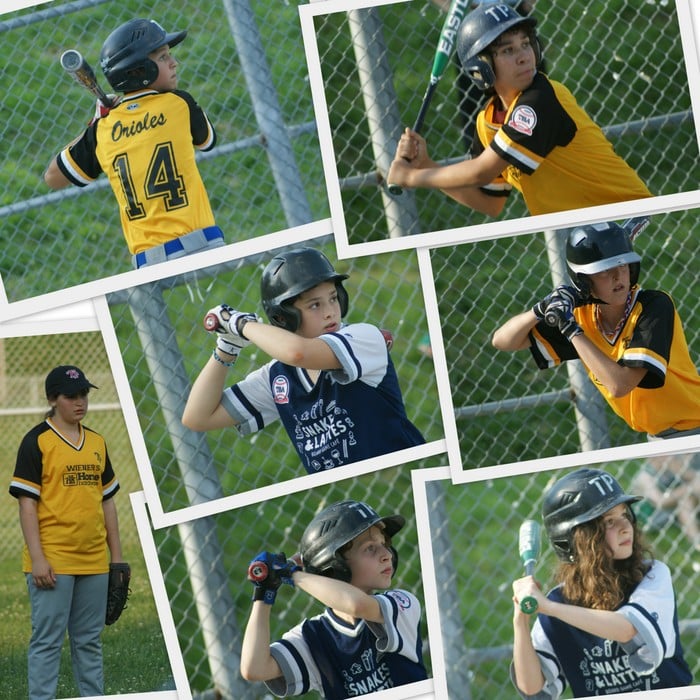 Clockwise from top left to centre: Simon (14) delivered a two RBI single in the fourth to propel the Orioles to victory; Lukas (10) stroked a 2 RBI single in the first to jump start the O’s into an early lead; Sacha (5) went 3 for 3 at the dish (single, two doubles) with a run scored and 2 RBI’s; In three appearances at the dish, Royals leadoff hitter Charley (5) went 2 for 2 (two singles, walk) along with two runs scored, 1 RBI and five stolen bases; Zachary (15) stroked a 2 RBI single during the Royals fourth inning rally; Orioles left fielder Astrid (11) made a Gold Glove catch in the fifth inning to quell a Royals comeback; Iliana (12) powered a solid hit to right in the fifth and scored a run for the Royals.

Beneath a thick sheath of humidity and hazy skies this evening at Christie Pits Diamond 2, the Orioles prevailed 9-6 over the Royals in an exhilarating 4 ½ inning Peewee Division showdown. 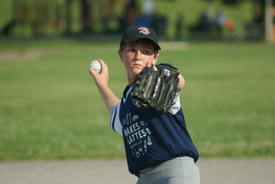 Royals reliever Thomas (11) threw a one run second inning against the Orioles with two strikeouts.

With the game tied 5-5 in the bottom of the fourth and with two Orioles runners on base, Simon (14) delivered a grace under pressure two RBI single to bring Ben (6) “The Matrix” and Brian (12) home with the go ahead (and eventual winning) runs of the game.

After Simon was thrown out trying to take an extra base on his hit, Jamie (2) singled and Joseph (1) was hit by a pitch to put two O’s on base. A Royals error allowed Jamie to score. With two outs, Sacha (5) “The Professor”, stroked a RBI  single to bring Joseph home.

Trailing 9-5, the Royals gamely battled back with a run in the top of the fifth to trim the deficit to three. With one out, Iliana (12) singled and eventually came home to score after a stolen base and an O’s error. However, Orioles closer Simon (14) found the groove and struck out two to seal the deal and the victory.

And lest we not forget about the great defensive play made by Orioles left fielder Astrid (11) during the fifth inning. Fighting off the bright glare of the sun in left field, Astrid raised her glove to make a Gold Glove shoestring catch to rob the Royal’s Lucas (6) of a sure hit and record the second out. 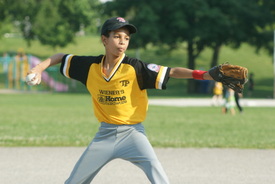 In the top of the first, the Royals had jumped out to an early 1-0 lead. With the one out and the bases loaded, Jacob (3) hit into a fielder’s choice that allowed Charley (5) to motor home with the first run of the game. However, O’s starter Ben the Matrix eventually found his rhythm and extricated himself from a mojo jojo pickle.

The O’s answered back with authority in the bottom of the fourth as they took a 4-1 lead. After leadoff hitter David (7) was hit by pitch, Sacha the Professor powered a RBI double to bring David home to tie the game.

With one out and the bases loaded, “Ribeye” Eric (13) hit into a fielder’s choice that allowed the Professor to come home and put the Orioles in front 2-1. Lukas (10) followed with a clutch two out two RBI single that brought Magnus (9) and Ribeye homeward bound.

Aided by some big defensive plays from his teammates, O’s reliever Ribeye (13) pitched a 1-2-3 top of the second to preserve the Orioles three run advantage. O’s shortstop Simon made an all star unassisted double play during the inning. With no outs and a Royals base runner at second, Simon caught a high pop up in the glare of the sun and had the wherewithal to tag a wayfaring Royal off second for the two out trifecta. 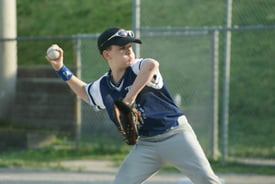 The Orioles scored a run in the bottom of the second to widen their lead to 5-1. However, Royals reliever Thomas (11) pitched a strong inning with two strikeouts to keep his team within striking distance.

The Royals came back with one in the top of the third to trim the deficit to three. After a lead off single by Charley, Arlo (8) delivered a RBI single to bring him home. Backed by solid play from his defense, Orioles reliever Lukas (10) extinguished the Royals rally attempt with a one strikeout effort.

The O’s loaded the bases in the bottom of the third. However, Royals reliever Tyler (7) got of the jam by pitching a scoreless inning with a strikeout.

In the top of the fourth, the Royals offense surged to life and scored three to tie the game 5-5. With two outs and two Royals on base, Zachary (15) delivered a two RBI single that brought Lucas (6) and Tyler home.

Trailing 5-4, Charley followed with a clutch RBI single that allowed Zack to motor home with the tying run.

The Matrix led off the bottom of the fourth inning with a walk and was followed by Brian with a single to put two Orioles on base.

It was at this juncture in the proceedings where Simon entered the batter’s box and stared into the hazy horizon and came face to face with his moment with destiny.