IN AN EXCITINGLY TIGHT GAME WITH RUNS AT A PREMIUM, THE JAYS RALLY FOR FOUR RUNS IN THE FINAL INNING TO TOP THE GO GO LIZZIES AT CHRISTIE PITS 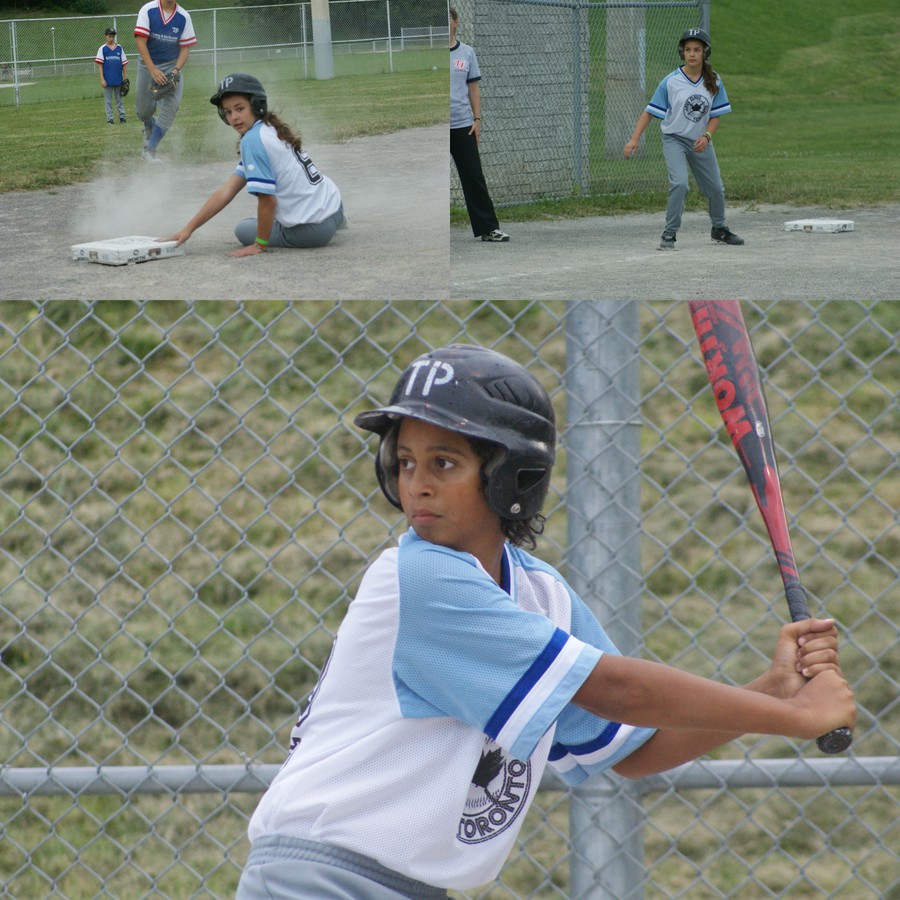 THE JAYS WINNING RUN > Clockwise from top left: With the score tied 4-4 in the top of the fifth, Beca (6) reached base on a two out walk and proceeded to steal two bases to reach third; With Beca representing the go ahead run at third, Nathan (12) delivers a clutch RBI single to drive in the Jays winning run over the Lizzies.

On a warm and pristine summer evening at Christie Pits Diamond 2, the Jays rallied in grand fashion to defeat the Lizzies 7-4 in a well contested five inning Peewee Division thriller. 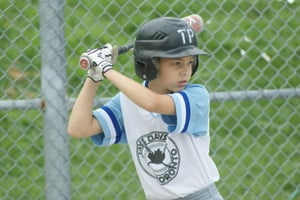 Angus (1) sparked the Jays offense with a 2 for 3 game at the plate with 2 RBI’s. Angus also closed out the game by pitching a scoreless inning in the fifth to seal the deal on the Jays victory.

In an entertaining affair by two talented teams, where runs came at a premium, the Jays battled back in the final inning to prevail over the Go Go Lizzies for the hard fought victory.

Trailing 4-3 in the top of the fifth, Jeremy (15) exercised great discipline at the plate to earn a one out walk. Once on base, Jeremy turned on the octane motor and stole two bases to reach third. Angus (1) stroked a clutch RBI single to bring Jeremy home with the tying run.

After Angus was caught in his attempt to steal second, Beca (6) doggedly worked the count in her favour at the dish and drew a clutch two out walk. Beca immediately turned on the jets and stole two bases to reach third. Yuki (4) followed with another walk to put two Jays on the basepaths.

With the potential go ahead run standing only seventy-five feet away, Nathan (12) powered a grace under pressure RBI single to bring Beca home with the Jays go ahead (and ultimately…winning) run.

Leading 5-4, the Jays tacked on two insurance runs for good measure. A subsequent sequence of balks issued by the Lizzies allowed both Yuki and Nathan to sashay homeward to close out the scoring in the inning. 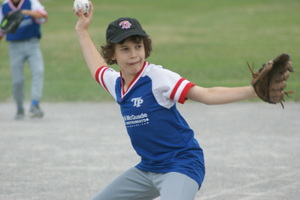 Lizzies reliever Cormac (4) pitched a tidy 1-2-3 third inning against the Jays to keep them off the scoreboard.

With some stellar defense from his teammates, Jays closer Angus (1) pitched a scoreless bottom of the fifth to seal the deal on the victory.

Second baseman Beca made two Gold Glove plays to douse the Lizzies comeback attempt. Like Kirby All Star from Nintendoland, Beca vacuumed up a hot grounder and made the quick throw to first baseman Nathan to complete the 4-3 play for the first out of the inning. With two outs and a runner at first, Beca corralled a hot shot in the shoestrings of her glove and made the tag on the Lizzies runner advancing to second for the unassisted third out to end the game.

The Jays jumped out to an early 2-0 lead in the top of the first. After Jeremy had led off the inning with a walk and stolen two bases. Angus delivered a RBI single to bring him in with the game’s first run. With one out, Nathan stroked a RBI single to allow Angus to come home.

However, Lizzies starting pitcher Marcus (8) eventually extinguished the Jays offensive thrust with a two strikeout effort. And left fielder Johnny (15) made a nice catch to record the third out.

In the bottom of the first, the Go Go Lizzies answered back with a run to trim the deficit to one. Jack (7) led off the inning with a walk and proceeded to steal two bases to reach third. On a subsequent Jays error, Jack motored home with the Lizzies first run.

With some nice defense from his teammates, Jays starter Nathan (12) short circuited the Lizzies charge with a one strikeout outing.

Lizzies reliever John Eric (2) tossed a scoreless top of the second with one strikeout to keep the Jays off the scoring ledger.

The Lizzies scored two in the bottom of the second to take the lead 3-2. After a pair of lead off walks to John Eric and John Lee (11) to start the inning, both runners eventually came home to roost after a series of Jays defensive miscues.

Lizzies reliever Cormac (4) pitched a tidy 1-2-3 top of the third with a strikeout to keep the potent Jays offense off the scoring abacus.

The Go Go Lizzies grinded out another run in the bottom of the third to widen their lead to 4-2. After Cormac and John (6) had respectively reached base on a pair of one out singles, John Eric stroked a sacrifice hit that allowed Cormac to come home.

However, Jays reliever Alex (9) and his defense gamely battled to limit the Lizzies to just one run. The defensive highlight was a 2-5 putout between catcher Cam (8) and third baseman Yuki, where Cam gunned a throw down to Yuki, who applied the tag to retire a wayfaring Lizzies baserunner attempting to steal third to record the first out of the inning.

In the top of the fourth, the Jays rallied for one run to cut the deficit to one. After Nathan had drawn a lead off walk and stolen two bases, Alex delivered a one out sacrifice hit to bring him home.

Shaken, but not stirred, Lizzies southpaw reliever John Eric limited the Jays to just a run in the inning with a one K effort.

Jays reliever Jeremy (15) struck out one to keep the Lizzies off the scoresheet in the bottom of the fourth. The defensive highlight of the inning was a sizzling catch made by centre fielder Alex to record the second out of the frame.

And, it was at this juncture in the proceedings in the top of the fifth, with the Jays down 4-3, where Head Coach Matt Byrnes and his players came face to face with destiny as they looked into the horizon and contemplated their final at bats in a whale of a game at Christie Pits.