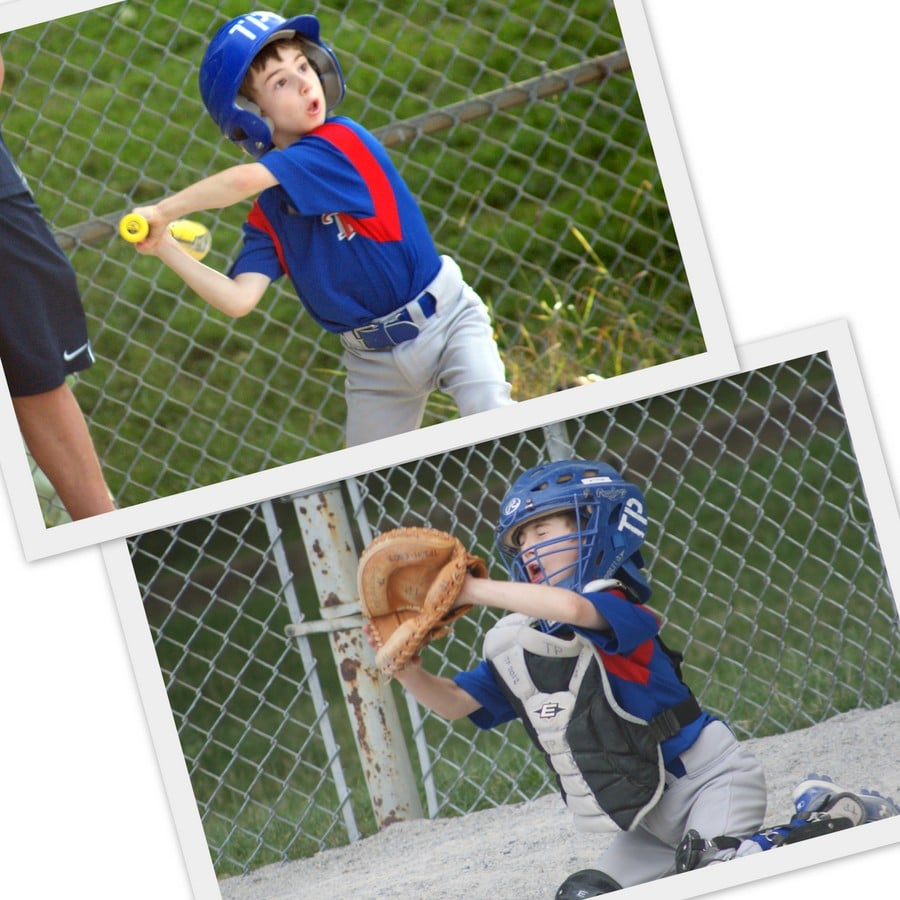 LIKE A ROCK > Emmett (3) sparked the TP offense with a 3 for 4 effort at the plate and three runs scored. Emmett also caught seven solid innings behind the dish for the Rookie Ball Selects. In the fifth inning, Emmett took receipt of a throw from first baseman Declan (13) and deftly blocked home plate and applied the tag on a sliding Trent (3) from Bloordale to complete a 4-3-2 bang bang putout to end the inning.

With a strong breeze in the air, the Bombers made the most of their offensive opportunities in the early innings in building a sizable lead over the Rookie Selects. Although Toronto Playgrounds played a strong game defensively and got their bats going late in the game; in the end, it was a hole from which TP was unable to extricate itself from.

In the top of the first inning, Bloordale burst out of the gates with an early 3-0 lead. However, some strong TP defense diffused the Bombers offensive surge.

TP second baseman Jacob (7) combined with first baseman Declan (13) for a pair of nifty 4-3 putouts in recording the first two outs of the inning. Right fielder Colby (28) battled the bright glare of the sun to make a Gold Glove catch on a deep fly ball off the bat of Bloordale’s Eric (7) to record the third out.

The Rookie Ball Selects answered back with one run in the bottom of the first to cut the deficit to two. After Emmett (3) and Hassan (9) had led off the inning with respective singles to put two runners on base, Jacob (7) delivered a fielder’s choice that brought Emmett home.

The Bombers added four more runs to the tally in the top of the second to widen their advantage to 7-1.

Once again, some strong TP defensive play minimized any additional damage. The highlight was Pitcher James (35) snagging a hot shot in his glove off the bat of Jacob (29) of the Bombers and making a laser throw to first baseman Declan to complete the 1-3 putout to end the inning.

After TP went down in 1-2-3 fashion in the bottom of the second, Bloordale punched in another run in the top of the third to increase their lead to 8-1. But, the TP defense stood tall once again in holding the potent Bombers offense in check.

Second baseman Dexter (4) made a nice unassisted putout at second for the first out. Pitcher James snared a searing hot tamale line drive shot off the bat of Bloordale’s Robbie (18) to record the second out. And shortstop Colby made a great catch on a sky high pop up off the bat of Trent (3) of the Bombers for the third out.

With TP unable to generate any offense in the bottom of the third, the Bombers added three insurance runs in the top half of the fourth to stretch their lead to 11-1. The TP defensive highlight was first baseman Declan’s amazing snare of a smoking hot liner off the bat of Bloordale’s Daniel (19) for the second out of the inning.

Toronto Playgrounds scored a run in the bottom of the fourth to trim the margin to 11-2. After a one out double by Jacob, Declan delivered a clutch two out RBI double to bring Jacob home.

Some stellar TP defense kept the Bombers off the scoreboard in the top of the fifth. The highlight was a stellar 4-3-2 putout to close out the inning. With two outs and Bloordale’s Trent (3) at second, Daniel (19) chopped a grounder to TP second baseman Jacob. Jacob fielded the ball and threw to first baseman Declan. In a close play at first, Daniel was called safe. However, Trent had rounded third and was motoring home. Declan made a laser throw to catcher Emmett, who deftly blocked the plate in All Star fashion and made the tag on a sliding Daniel in a bang bang shish koom bah play to record the third out.

With TP unable to score in the bottom of the fifth, Bloordale added another run in the top of the sixth to increase their lead to 12-2.

The Rookie Ball Select bats came alive in the bottom of the sixth as they scored three to trail 12-5. After singles by Emmett , Spencer (15) and Declan loaded the bases, Aaron (21) followed with an one out two RBI single to bring Emmett and Spencer home. A subsequent Bloordale fielding error allowed Declan to score.

Holding the line, the TP defense was rock solid in keeping the Bombers off the scoring ledger in the top of the seventh.

Shortstop Spencer made a nice catch on a blue sky pop up for the first out. First baseman Declan corralled a hard hit grounder to record the second out. And right fielder Colby made a highlight reel shoestring catch in the webbing of his mitt on a deep fly ball off the bat of Bloordale’s Daniel to record the third out.

Down by seven, TP gamely battled back with a run in the bottom of the seventh. Spencer stroked a RBI single to bring home Emmett, who had led off the inning with a single.