IN A TIGHTLY CONTESTED AFFAIR, THE A’s PREVAIL OVER TORONTO PLAYGROUNDS IN THE FINAL INNING AT CHRISTIE PITS 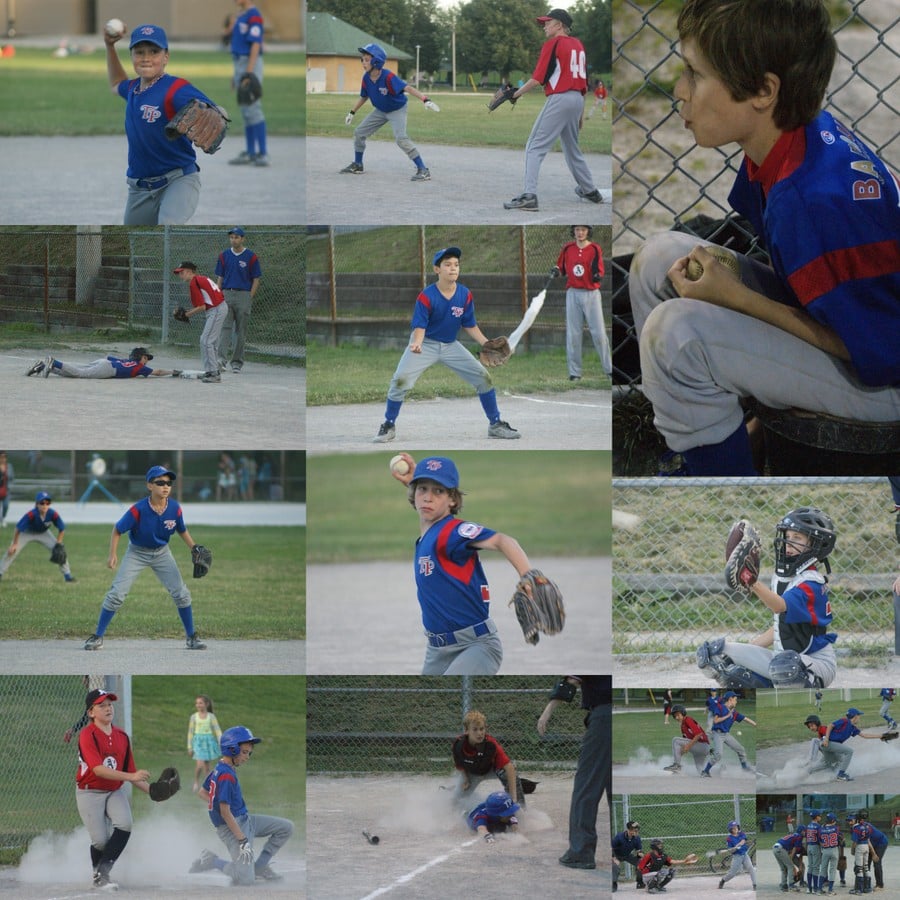 Underneath the lights on a warm and tranquil evening at Christie Pits Diamond 2, the Annette A’s defeated our TP Minor Peewee Selects 7-4 in an entertaining five inning EBA West Select Loop showdown.

In a closely contested game where the superb defenses of both squads ruled and runs came at a high premium for the vast majority of the proceedings, the A’s ultimately prevailed over Toronto Playgrounds in the final inning by making the most of the opportunities presented to them.

Annette utilized a four hit attack in the top of the first and charged out of the gate with an early 3-0 lead.

Some solid TP defensive play got them out of inning without any additional damage. The highlight was a 6-2 putout from shortstop Zack (32) to catcher Arlo (7). Jack (36) of the A’s was trying to stretch a triple to right field into an inside the park homer when Zack received the throw from the outfield and made a cannon of a throw to Arlo, who deftly applied the facial tag on the dead on arrival Jack at home plate to record the first out of the inning.

The Minor Peewees answered back with two runs in the bottom of the first to trim the deficit to one. After a one out single by Zack, Jack followed with a RBI triple to bring Zack home with TP’s first run of the game. Subsequently, Jack would motor home on a failed pickoff attempt by Annette starting pitcher Jack (36) that sailed down the third base line.

In the top of the second, TP starter Owen (12) threw a scoreless inning with some strong defensive help from his teammates. Second baseman Brian (25) hooked up with first baseman Jack to turn a pair of nice 4-3 putouts. Shortstop Zack made a superb 6-3 throw to first to retire the speedy Cam (17) of the A’s.

Annette retired TP in 1-2-3 fashion in the bottom of the second. A’s pitcher Jack turned a double play (1-3) to stymie the Minor Peewee offense.

With TP pitcher Owen throwing another shutout inning in the top of the third, centre fielder Brian turned in a pair of Gold Glove defensive plays to keep Annette off the scoreboard.

Brian made a nice catch in centre on a hard hit fly ball by Annette’s Eli (33) for the first out. With the A’s Jack on second and one out, Matthew powered a screamer to centre which Brian nabbed in the webbing of his glove for the second out. Noticing that Jack had wandered off base, Brian made a laser throw to second baseman Adam (18) to complete a double play.

The Minor Peewees scored a run in the bottom of the third to tie the match 3-3. After Cam (88) was hit by a pitch to lead off the inning, he turned on the jets and stole two bases to reach third. With two outs, Zack stroked a clutch RBI single to bring Cam home and even the proceedings.

Annette answered back in the top of the fourth with a run to retake the lead 4-3. However, TP dodged a bases loaded bullet with a mix of strong pitching from reliever Zack (one strikeout) and some wall of sound defensive play from his teammates. Right fielder Thomas (23) made a solid grab on Rory’s (39) of the A’s fly ball to record the second out. Second baseman Cam made a nice catch on sky blue sky pop up off the bat of Annette’s Cam for the third out with the bases juiced.

With resolve, Toronto Playgrounds gamely rallied for a run in the bottom of the fourth to tie the game 4-4. After Thomas had led off the inning with a single and stole two bases, Arlo delivered him home with a RBI sacrifice hit.

In the top of the fifth, the A’s took advantage of a TP fielding error to send eight batters to the plate and score three runs to take a 7-4 lead.

Refusing to concede defeat, TP continued to battle in the bottom of the fifth by putting two runners on base. However, backed by some solid defense from his teammates, A’s closer Miller (35) eventually sealed the deal on a hard fought victory.

The Minor Peewee Selects (3-6-1) continue their home stand on Wednesday, July 31 when they host the Martingrove (2) White Sox at Christie Pits Diamond 2 at 7:30 p.m.