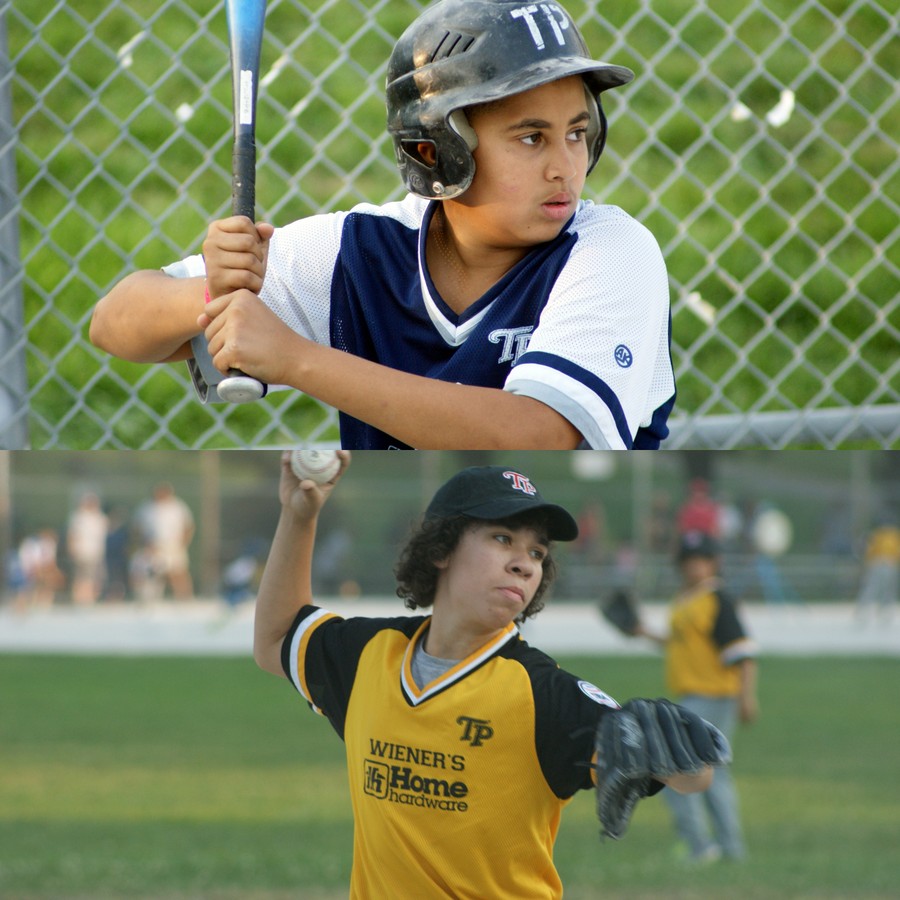 Top to bottom: Xavier (4) of the Royals blasted a towering “oppo taco” triple in the top of the third. Xavier also pitched two workmanlike innings of relief with three strikeouts; Orioles reliever Lukas (10) threw a scoreless third with 3 K’s.

Beneath sunny and humid skies this evening at Christie Pits Diamond 2, the Orioles topped the Royals 8-3 in 3 ½ innings of Peewee Division action.

In the top of the first, the Royals made the most of their offensive opportunities to jump out to an early 3-0 lead. With one out and a runner on base, Arlo (7) stroked a RBI single to bring home Thomas (11) with the Royals first run of the game.

After a two out walk to Adam (9), Jacob (3) powered a clutch two RBI double that allowed Arlo and Adam to come home.

With the bases loaded, Orioles starter Simon (14) recorded his third strikeout of the inning to extinguish the Royals uprising.

Taking advantage of a series of Royals defensive miscues, the O’s scored four in the bottom of the first to take the lead 4-3.

Defense dominated the second inning as both teams were unable to score. With one out and Royals base runners at third and first, the Orioles turned in a nice 1-2 putout on a fielder’s choice in the top of the second. O’s reliever Joseph (1) collected a chopper and threw home to catcher Simon (14), who deftly applied the tag on a sliding Thomas of the Royals in a close play at the plate to record the second out.

In the bottom of the second, Royals catcher Owen (14) nailed an O’s base runner attempting to steal third. With Fabrizio (8) motoring from second to third, Owen made a laser throw to third baseman Arlo, who applied the tag on wayfaring Oriole.

With one out in the top of the third, Xavier powered a majestic triple to the deep dish pizza regions of right field. However, Orioles reliever Lukas (10) struck out the next two Royals to leave the potential tying run stranded at third.

The Orioles exploded for four runs in the bottom of the third to widen their advantage to 8-3. With no outs and Orioles at third and second, Simon took advantage of a Royals defensive error to fly home from third. After a walk to Micheal (3), Eric (13) delivered a RBI single to score Lukas.

Backed by his defense, Orioles closer Jamie (2) sealed the deal when he retired the Royals in 1-2-3 fashion in the top of the fourth. Jamie also helped his cause after he successfully picked off the Royals lead runner at first on a 1-3 putout.