TIED 7-7, THE CARDS SCORE TWO IN THE FINAL INNING TO WIN THEIR OPENING ROUND ROBIN TOURNAMENT GAME OVER THE ARTFUL DODGERS AT CHRISTIE PITS 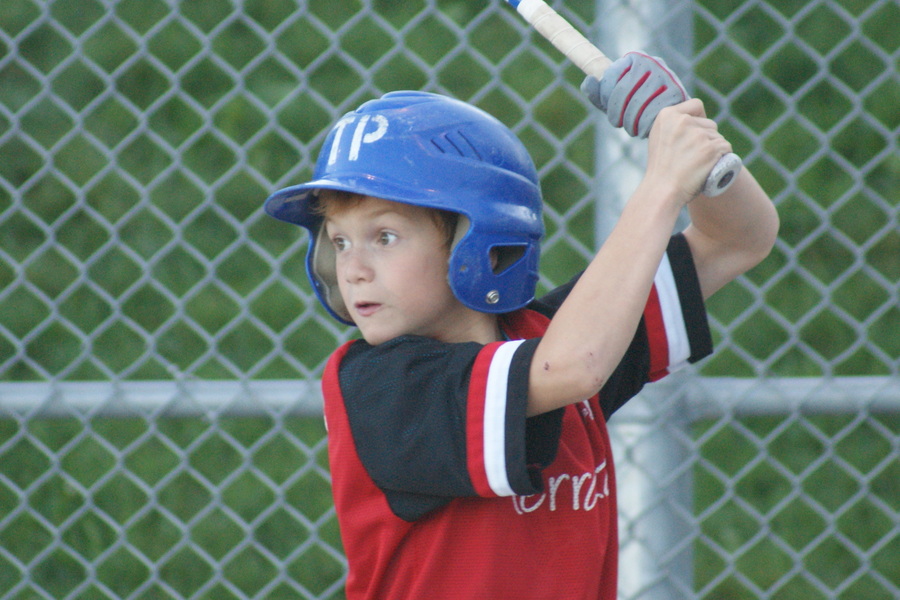 DELIVERY MAN > With a base runner on second and the game tied 7-7, Alex (6) stroked a clutch one out RBI double to bring Jake (2) home with the Cardinals go ahead run. Subsequently, Alex would steal home to bring in an insurance run in the Cardinals 9-7 win over the Dodgers. In two plate appearances, Alex went 1 for 1 (walk, single) with two runs scored and a RBI.

Under a layer of sunny and cloudy skies this evening at Christie Pits Diamond 2, the Cardinals prevailed 9-7 over the Dodgers in four riveting innings of Mosquito Division round robin tournament action.

In a titanic rock ’em sock ’em showdown between two talented squads, the Cardinals emerged victorious in the fourth inning when they scored two runs to break a 7-7 deadlock.

After a one out single by Jake (2), Alex (6) stroked a RBI double to bring Jake home with the go ahead run. Subsequently, Alex was able to steal home and score an insurance run for the Cardinals.

With some solid defensive play from his teammates, Cardinals closer Jonathan (4) sealed the deal in the bottom of the fourth with a 1-2-3 inning.