WITH RAIN POURING DOWN LIKE SILVER, THE ARTFUL DODGERS SLIP BY THE BIG RED MACHINE IN THE THIRD INNING TO SNARE THEIR SECOND ROUND ROBIN GAME VICTORY AT THE TOURNAMENT 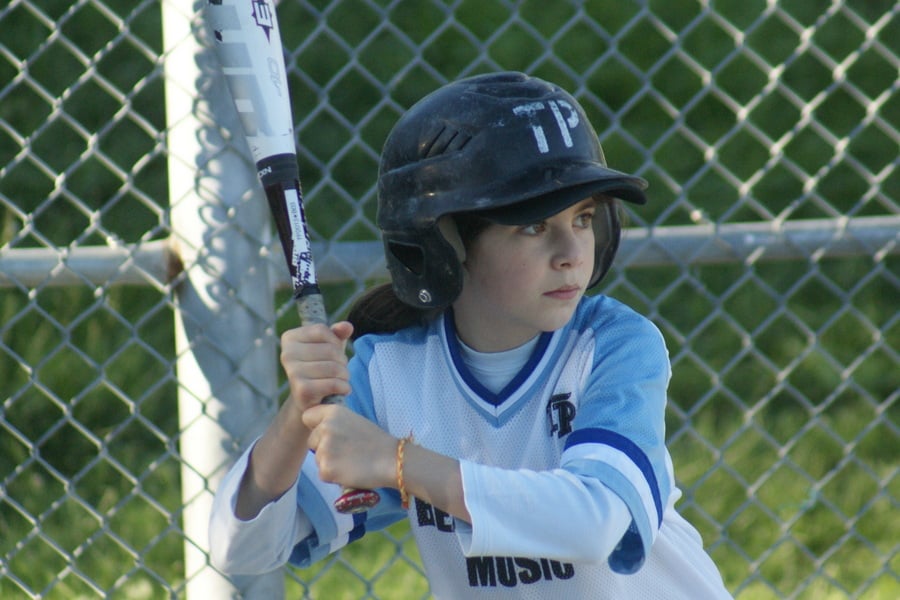 GRACE UNDER PRESSURE > With the game tied 2-2 and the bases loaded, Olivia (6) delivered a clutch one out RBI single in the top of the third inning at Christie Pits Diamond 3 to bring Tango (5) home with the Dodgers winning run over the Reds.

Beneath a canopy of overcast and rainy skies this morning at Christie Pits Diamond 3, the Dodgers edged the Reds 3-2 in a watery 3 ½ innings of Mosquito Division round robin tournament action.

Trailing 2-1, the artful Dodgers rallied for a two runs in the top of the third to take the lead. After Jian (4) had led off the inning with a single and a pair of stolen bases, Gen (10) stroked a RBI single to bring Jian home from third with the tying run.

Subsequently, with one out and the bases loaded, Olivia (6) stepped up to the plate with the rain drizzling down and delivered a grace under pressure RBI single that brought Tango (5) home with the Dodgers go ahead run.

With the rainfall increasing in intensity with every millisecond and a slender 3-2 lead to protect, Dodgers closer Jian (4) stepped onto the pitching rubber and struck out two Reds to seal the deal.

*Result Pending: The Dodgers and Reds played a round robin tournament game that was suspended after three innings of play. If the outcome of that game would affect the standings and the quarter-final match-ups, the fourth inning will be completed at the earliest possible time.