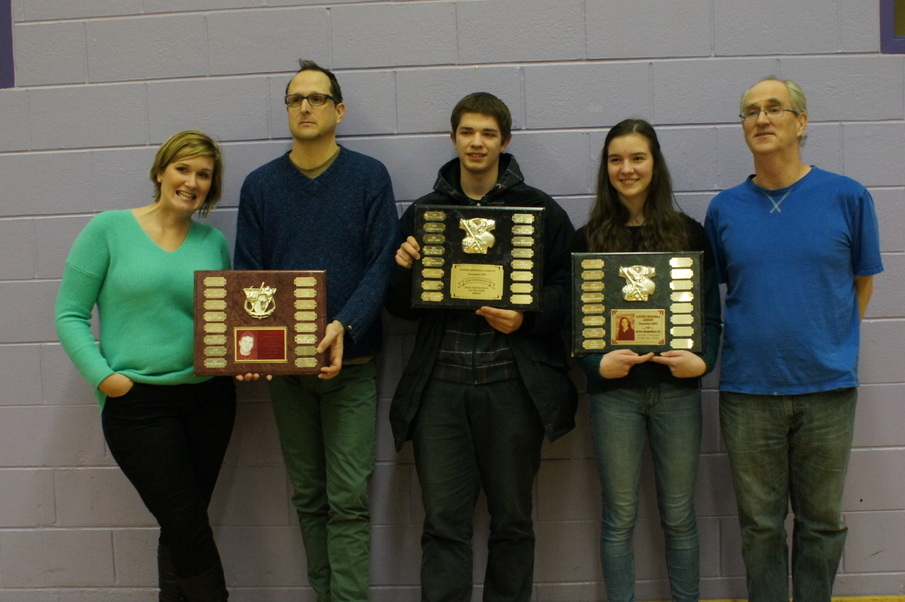 Here are the winners of our 2013 awards:

Although Zoe has only played a few seasons in our league, she has become an amazing participant in our house league. This past season, she attended all games (except one on her graduation night!) and all practices, as well as filling in during many midget games. Her friendly enthusiastic personality is a joy at the diamond, and Zoe is indeed a deserving winner of the 2013 Female Participant of the Year Award. Well done!

Joel has played in our house league program over the span of many years, sometimes taking time off to play rep baseball. This past season, his participation was incredible! He played in our midget division, umpired games in all of our divisions from mosquito to bantam, and was one of the mainstays of our tee ball and rookie ball divisions as “Umpire Joel”. In addition he ran a sliding clinic early in our season for our younger players and assisted with other clinics throughout the season. Joel is indeed a deserving winner of the 2013 Male Participant of the Year Award. Well done!

2013 Volunteers of the Year:  Paul Kelly and Reagan Maude

Paul has been involved with our house league program since 2006, the first year his eldest son (Sam) registered to play. Fortunately for all of us, his relationship with our league has continually grown over the years, as his son Jude also joined our league in 2008. Paul moved from being an involved parent to being an assistant coach, and then to becoming a head coach. This past season he coached his youngest son’s (Jude) rookie ball team while also being a very involved assistant coach with Sam’s bantam team. In addition to this, he has been a member of our house league committee for several years, and has made valuable contributions to our league on that level as well. Congratulations Paul!

Reagan joined the TP Baseball family in 2008 when her eldest son Lachlan began playing Tee Ball at Bickford Park.  Following his mother’s love of the game of baseball, Lachlan soon was ready to play on our Inaugural TP Rookie Ball Select Team in the summer of 2011. With her unbridled zeal, Reagan quickly took over the general manager’s role of that team and has continued to support both Select and House League Baseball programs. Spending endless hours at the diamond helping to organize and coach Select and House League, and when we held celebration days or needed extra hands, Reagan recruited her family and friends: Husband Marco to help at the Derby, Brother Casey to Coach, Matt to coach and lend his design expertise, and Uncle Paul’s contributions as photographer are well known! It was Reagan’s idea to launch the Derby for Distance Event in 2012 and she singlehandedly planned and gave birth to our much loved annual fundraising event, not to mention baking those famous “T” “P” cookies!

When we needed prizes last fall, Reagan dressed Lach up in his baseball uniform and marched him around the Annex with Nico in tow to visit local businesses to collect prizes for the Derby event. In 2012, we raised $1,500 and last year we raised closer to $2,000. Always one to welcome a new face to TP Baseball, Reagan took player favorite Ryusuke under her wing and ensured he made it to games and practices, fed him and helped plan his going away party. Even with Lachlan away at summer camp in July – Reagan, Casey and Matt were at the Select and House League games and tournaments supporting the team.

Thank you Reagan for your dedication to TP Baseball; for your creative energy; your sense of humour; calming demeanour and for helping make TP the place to play the game we all love so passionately. Congratulations for everything that you’ve done for TP!