FIRING ON ALL CYLINDERS, THE ATHLETICS LAUNDER THE SOX TO EARN THE WIN AT DOMINICO FIELD AT CHRISTIE PITS 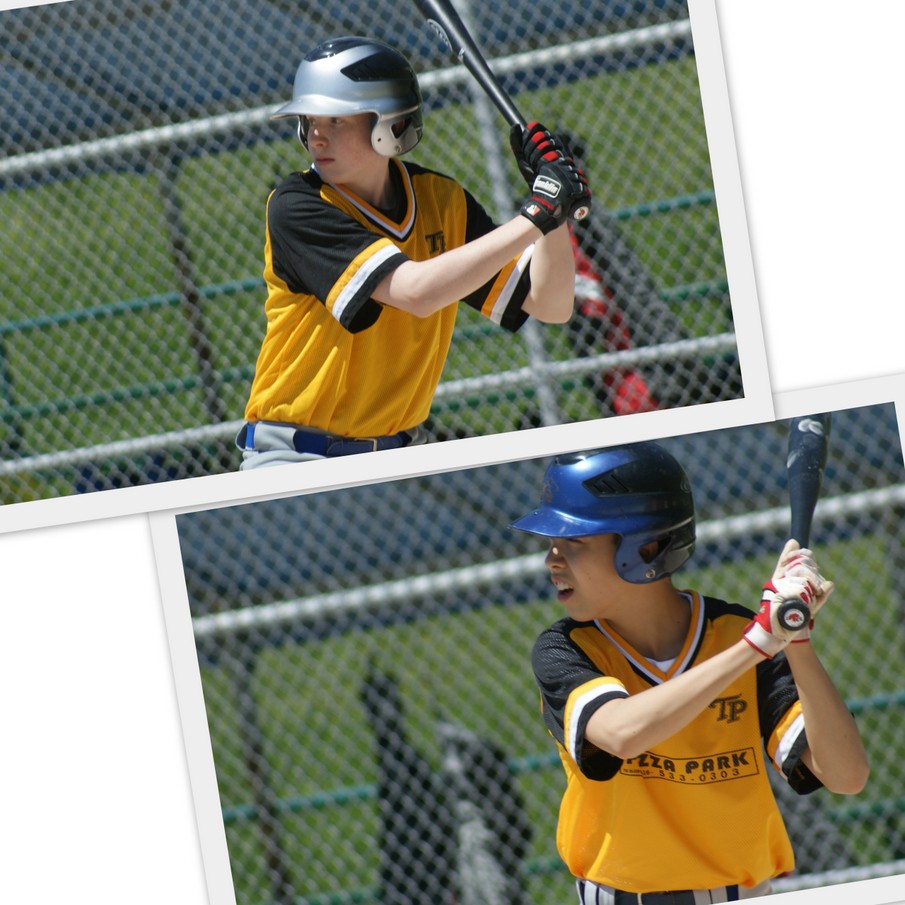 AAA SPARKPLUGS > From top to bottom: Evan (12) ignited the A’s offense with a 4 for 5 game at the plate while scoring three runs and driving in 2 RBI’s. Evan also closed out the victory over the White Sox by striking out a pair to seal the deal in the fourth inning; Jerome (3) sparked the A’s offense with a 4 for 5 effort at the plate [three singles and a double] while scoring three runs and stealing three bases against the White Sox. Jerome was also the A’s starting pitcher where he pitched two strong innings to pick up the victory [2 IP, 3 R, 2 ER, 3 H, 2 W, 3 K’s].

Under a ceiling of warm and beautiful blue skies, the A’s defeated the White Sox 13-5 in four innings of Bantam Division play this afternoon at Dominico Field at Christie Pits.

In an entertaining game between two historic divisional rivals, the Athletics used an elixir of strong pitching, stingy defense, and making the most of their offensive opportunities to prevail over the Sox.

With three A’s pitchers combining to neutralize a potent White Sox offense with seven strikeouts, the Athletics batting order generated twelve hits in key junctures of the proceedings to cruise to the victory post.

In the top half of the first, the A’s scored two runs to take an early 2-0 lead. With one out, Dylan (12) reached base on a White Sox fielding error. Evan (10) followed with a clutch RBI single to bring in Dylan with the game’s first run. Subsequently, Evan would motor home after a pair of wild pitches.

Kudos to Jacob (6) who bravely donned the gear to be the White Sox’s catcher for three steady innings.

A’s starter Jerome (3) struck out a pair of White Sox in the bottom of the first to keep them off the scoresheet.

The Athletics added four in the top of the second to extend their advantage to 6-0. With two runners on base, Evan stroked a RBI single to plate Tim (13) and tie the game.

After a single by Jerome and a walk to Malcolm (14) loaded the bases, the Sox uncorked a wild pitch that allowed Evan to zoom home with the go ahead run. Subsequently, Tim and Dylan followed with a respective RBI single and a RBI walk that allowed Tim and Malcolm to come home to roost.

The White Sox answered back with three in the bottom of the second to trim the deficit to three, With one out, Thomas (12) drew a walk and David (2) singled to put two Sox runners on base at second and first. As Thomas made a dash for third in a steal attempt, the throw from A’s catcher Tim (13) sailed high down the third baseline and Thomas was able to hustle home with the White Sox’s first run of the game. After a walk to Jamie (15), David and Jamie eventually came home to roost after a series of wild pitches by the A’s.

However, the A’s rang up three more in the top of third to stretch their lead to 9-3. After Evan and Jerome reached base on respective singles to lead off the inning, Malcolm and Tim followed with respective RBI sacrifice hits to bring them home. After a two out walk to Dylan, Evan would hit a RBI single to bring Dylan homeward bound.

In the bottom of the third, the White Sox trimmed the margin to 9-5 with a pair of runs. With one out, Jamie drew a bases loaded RBI walk to bring home Baxter (3). With two outs and the bases juiced, a wild pitch by the A’s would allow David to saunter home from third. A’s reliever Tim (13) eventually found his groove and proceeded to strike out two White Sox batters to quell the uprising.

The Athletics added four insurance runs in the top of the fourth to salt the game away. After a lead off double and a stolen base, Jerome would blaze home on a wild pitch to score the inning’s first run. With the bases loaded and no outs, the White uncorked a series of wild pitches that would subsequently allow Malcolm, Tim and Dylan to book their train ticket home with three more runs.

In 1-2-3 fashion, A’s southpaw closer Evan (10) mowed down a pair of White Sox in the bottom of the fourth to seal the deal on a well earned victory.