DOWN 2-0, A GRITTY TORONTO PLAYGROUNDS TEAM RALLIES FOR AN ELECTRIFYING VICTORY OVER THE BLUEHAWKS AT DOMINICO FIELD AT CHRISTIE PITS TO EARN THEIR FIRST WIN OF THE TBA SELECT REGULAR SEASON

GRACE UNDER PRESSURE: With the score tied 2-2 in the bottom of the seventh, Stanny (2) [top] delivers a clutch two out RBI single to bring Tyler (4) [bottom] home from third with TP’s winning run over West Hill at Dominico Field at Christie Pits.

Beneath a blanket of beautiful warm and sunny blue skies, our Toronto Playgrounds Midget Selects rallied from a two run deficit to usurp the West Hill Bluehawks 3-2 in seven scintillating innings of TBA Select action this afternoon at Dominico Field at Christie Pits.

With the score knotted at 2-2 in the bottom of the seventh, Tyler (4) hit a clutch two out single and proceeded to reach third on a stolen base and a wild pitch. After a walk to Sam H. (23) put two TP runners on base, Stanny (2) delivered a grace under pressure RBI single to right field that allowed Tyler to dash home with the winning run.

In a well played two hour affair where superb pitching and solid defense dominated the proceedings, runs were few and far between as they were earned on the field of play at a high premium by two talented and well coached teams.

Four TP pitchers combined to limit West Hill to two runs over the course of seven innings while allowing only one hit and striking out twelve. Meanwhile, Bluehawks starter Michael (7) threw a superb complete game where he allowed only three runs over seven, while limiting the Midget Selects to seven singles and mowing down twelve.

West Hill jumped out to an early 1-0 lead in the top of the first. With Bluehawks runners at third and second and no outs, Michael (7) came home from third on a wild pitch to score the first run of the game. However, on the wild pitch to the backstop, TP catcher Tyler corralled the ball and made a throw down to third to erase Derek (10) in a run down for the first out. TP starter Stanny (2) settled in and proceeded to strike out the next two Bluehawks to close out the inning.

Bluehawks starter Michael struck out three in the bottom of the first to keep TP off the scoreboard. 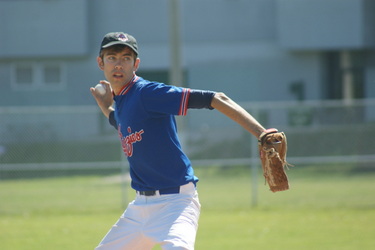 The Bluehawks tallied another run in the top of the second to widen their lead to 2-0. With West Hill runners on third and first and no outs, the Bluehawks executed a double steal that allowed Noah (36) to motor homeward from third. With some help from his defense, TP starter Stanny mowed down a pair of Bluehawks to quell the uprising.

Michael of West Hill pitched a 1-2-3 bottom of the second with a strikeout to keep the Midget Selects off the scoring ledger.

In the top of the third, TP reliever Sam G. (13) and his defense retired the Bluehawks in 1-2-3 fashion to keep them off the scoresheet.

Bluehawks starter Michael struck out one and retired TP in order in the bottom of the third to preserve their two run plurality.

TP reliever Sam G. mowed down a pair of Bluehawks in the top of the fourth to keep them nested.

After a pair of leadoff singles by TP put two runners on base in the bottom of the fourth, West Hill’s Michael erased the threat by striking out the next three Midget Select batters to subdue the TP uprising.

In the top of the fifth, TP reliever Daniel (5) struck out three Bluehawks to keep West Hill off the board amd the Midget Selects within striking distance.

Toronto Playgrounds rallied for a pair in the bottom of the fifth to even the proceedings 2-2. Respective singles by Michael (6) and Cooper (8) would put a pair of TP runners on base to lead off the inning. With one out, Tyler stroked a RBI single that allowed Michael to come homeward and trim the deficit to one. West Hill pitcher Michael would subsequently uncork a wild pitch that allowed Cooper to blaze home with the tying run.

TP reliever Daniel was masterful in the top of the sixth as he mowed down the first three Bluehawks that he faced to keep the game tied.

West Hill pitcher Michael subdued a TP threat in the bottom of sixth to preserve the stalemate.

With TP reliever Alex (18) on the mound, the Midget Selects rose to the occasion with some solid defensive play in the top of the seventh to keep the Bluehawks offense at bay.

After a hard shot off the bat of West Hill’s Noah, TP shortstop Tyler went deep into the hole and made a laser throw to first baseman Stanny to turn a 6-3 putout for the first out.

A subsequent TP fielding error would allow Donald (13) to reach first. However, the Bluehawk threat was erased when Alex made a great pickoff throw to first baseman Stanny, who deftly applied the tag on Donald to record the second out of the inning.

Battling the bright glare of the afternoon sun, TP first baseman Stanny made a nice catch on a mile high pop in shallow right field for the third out.

After Bluehawks pitcher Michael had struck out the first two TP batters in the bottom of the seventh, it was at this juncture that Tyler stared into the sunny horizon from the batter’s box and came face to face with his moment with destiny.