TIED 5-5, TORONTO PLAYGROUNDS PULLS AWAY FROM THE BOMBERS WITH FIVE RUNS IN THE FINAL TWO INNINGS TO WIN THEIR THIRD EBA SELECT GAME OF THE SEASON 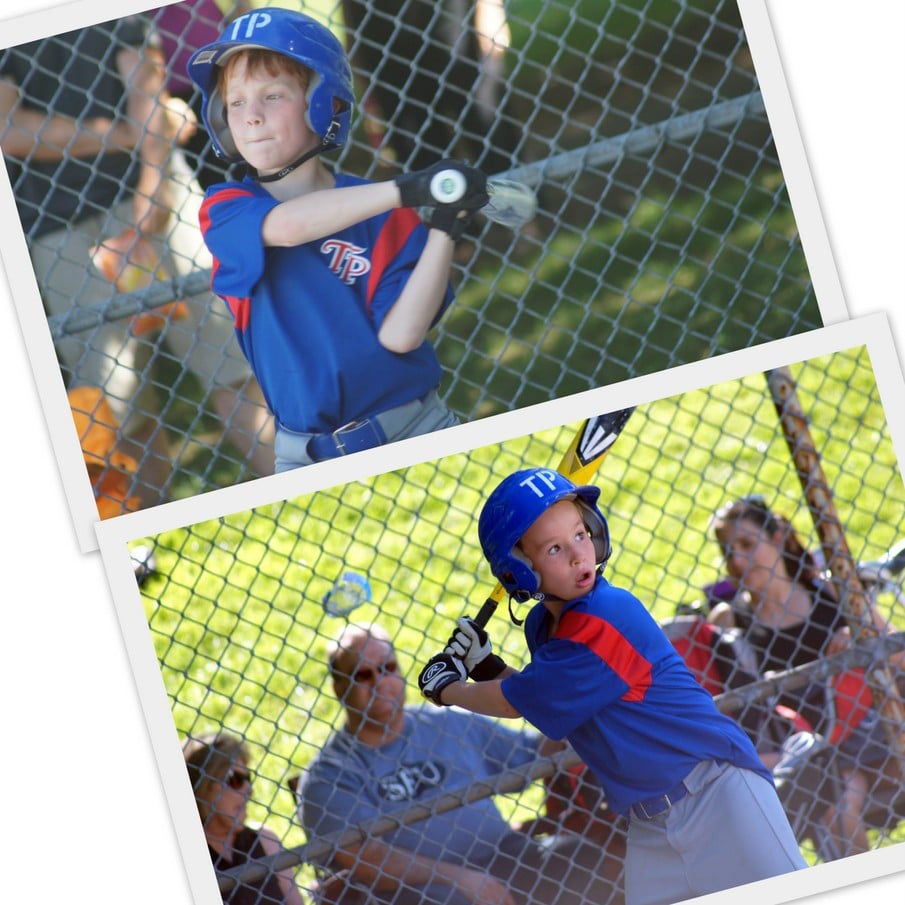 Top to bottom: Theo (17) delivered a clutch RBI double in the fifth inning to bring Zev (32) home with TP’s winning run over Bloordale. Theo went 2 for 3 at the plate [two doubles] with two runs scored and an RBI; Cassius (5) powered the Rookie Ball Select offense with three RBI’s by going 1 for 2 in three at bats [double, sacrifice].

In a well played affair between two talented and well coached teams, it was a tight seesaw affair with the game tied 5-5 after four innings of play.

However, TP’s bats came alive during the latter two innings as they made the most of their opportunities to pull away from the pesky Bombers. In addition, the Rookie Ball Selects displayed some well timed defensive prowess in the final frames to stymie any Bloordale comeback.

Bloordale jumped out an early 2-0 lead in the top of the first. After a pair of back to back singles by Marco (45) and Robbie to lead of the inning, they were subsequently brought home by Jordan (12) [RBI single} and Matthew E. (17) [fielder’s choice].

TP responded with a pair in the bottom of the fifth on three consecutive doubles to even the proceedings 2-2. After a two out double by Theo (10), Dexter (10) stroked a RBI double that brought Theo home with the Rookie Selects first run of the game. Cassius (5) followed with a RBI double to score Dexter.

After both Bloordale and TP did not generate any runs in the second and third innings, the Bombers scored two in the top of the fourth to take a 4-2 lead. After a leadoff single by Robbie, he eventually came home to roost after a TP error. With two outs and two runners on base, Aidan (10) would deliver a RBI single to plate Tristeo (11).

In the bottom of the fourth, a gritty Toronto Playgrounds answered back with three to take a 5-4 lead. After a leadoff single by Dexter, Cassius delivered a RBI sacrifice hit to bring Dexter home and trim the deficit to one.

The pesky Bombers responded with a run the top of the fifth to tie the game 5-5. With no outs and a pair of Bloordale runners on base, Clarke (20) delivered a RBI single that allowed Nathan (7) to motor home with the tying run.

However, some solid TP gold glove defense during the inning extinguished the Bloordale uprising. Second baseman Daniel fought off the ultra bright glare of the afternoon sun to make a nifty catch on a mile high pop up off the bat of Bloordale’s Johnny (3) for the first out. Later, pitcher Ronin (4) battled the sun and made a nice shoe string catch on a pop up from Marco to record the third out.

TP answered back with two in the bottom of the fifth to retake the advantage 7-5. After a leadoff single by Zev (19), Theo delivered a grace under pressure RBI double to bring Zev homeward and put TP into the lead. Dexter followed with a RBI double to plate Theo.

In the top of the sixth, Bloordale made a dogged comeback attempt by getting two Bombers on base with one out. However, some stellar TP defense torpedoed the rally bid. With one out and Bombers at second and first, third baseman Vincent snagged a hot tamale grounder off the bat of Bloordale’s Matthew E. (17) and stepped on third base for the force out of Jordan to record the second out.

With two outs and two Bombers on the sacks, Matt L. (13) hit a searing line drive between third and second that was destined for the outfield. However, shortstop Dexter icily caught the smokin’ liner in the shoestrings of his glove to record the third out.

Toronto Playgrounds would add three insurance runs in the bottom of the sixth to salt the game away. With one out and two TP runners on base, Solomon (23) would deliver a two RBI single that brought Lewis and Cooper (27) homeward bound. Subsequently, with two outs and two runners on base, Ronin would stroke a RBI double to plate Daniel.

“Major, major win right here today.  To take down Bloordale – a perennial powerhouse of the EBA – is a real achievement.  I’ve been coaching this team for three years and we’ve never beaten Bloordale before. We did it with tight defence and an offence that just keeps coming. Every player got a hit today – every player is a threat at the plate. The team has matured. They’re not just kids who play baseball – they are baseball players. Confident, level-headed and gritty. We’ve got another test on Tuesday against Royal York.  We’re ready.”

On the TP offensive abacus logbook:

With their victory this afternoon, the Rookie Ball Selects even their regular season record at 3-3. TP will hit the road for their EBA Select next game when they travel to Jeff Healey Park on Tuesday, June 24 to play against the Royal York Cardinals at 6:30 p.m.