TIED 4-4, THE O’s SCORE FOUR IN THE THIRD TO WIN THE ORNITHOLOGICAL SHOWDOWN OVER THE JAYS AT CHRISTIE PITS 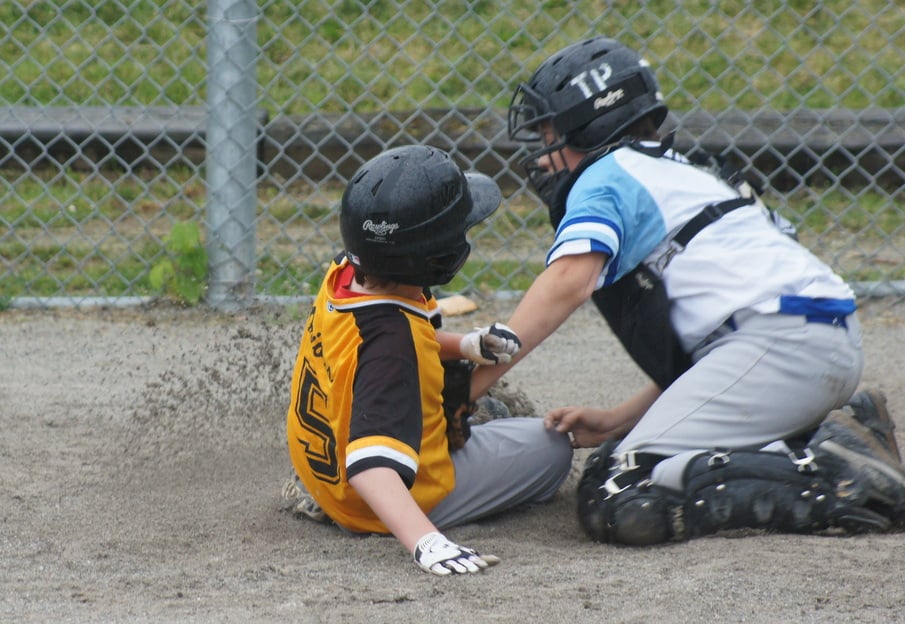 With the game tied 4-4, Thomas R. (5) slides under the tag of Jays catcher Adam (8) to score the Orioles go ahead and winning run on a steal of home in the bottom of the third inning at Christie Pits Diamond 2.

Beneath cloudy and overcast skies, the Orioles defeated the Jays 8-4 in 3 ½ ornithological innings of Peewee Division action this evening at Christie Pits Diamond 2.

With a little help from his friends, Orioles starter Thomas R. (5) struck out one on the top of the first to keep the Jays off the scoresheet.

The Orioles took advantage of a pair of Jays errors in the bottom of the first to take an early 3-0 lead. With two O’s runners on base, the Jays misplayed a two out hit by Jacob (15) that resulted in Henry (11), James (13) and Jacob coming homeward to score. 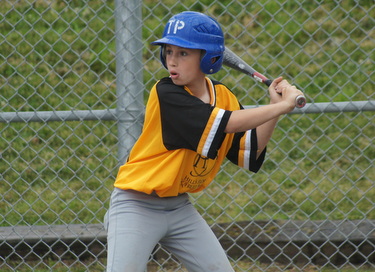 Shaken, but not stirred, Jays starter Kyle (5) mowed down two to extinguish the Orioles insurgency.

Orioles reliever Jonathan (1) fanned one to keep the Jays off the scoring ledger in the top of the second. Jonathan was helped out on a nifty double play turned by his defense. O’s third baseman Thomas R. snared a hot tamale line drive off the bat of the Jays Curtis (4) for the second out of the inning and threw over to first baseman Ethan (8) to nab a wayfaring Jays base runner to complete the 5-3 double play.

In the bottom of the second, the O’s added another run to widen their advantage to 4-0. With two runners on base, Mabon (3) delivered a RBI sacrifice hit to bring home Cameron (6).

Making hay of nine walks, the Jays rallied with four runs in the top of the third to even the proceedings 4-4. With one out and the bases loaded, Dylan (15) drew a RBI walk to bring in Harrison (13) with the Jays first run of the game.

With two outs, Kyle drew a RBI walk to score Adam (8). Jaleelah (6) would follow with a daring steal of home that allowed the Jays to trim the deficit to one.

Two walks would subsequently follow that allowed the Jays to reload the bases. Jackson (14) would garner a RBI walk to bring Dylan home with the tying run.

In the bottom half of the third, the O’s would feast upon five walks and answer back with four to retake the lead 8-4. With no outs and the bases juiced, Thomas R. would brazenly steal home from third and score the go ahead run.

With the bases loaded, Jacob would deliver a clutch two RBI single to bring home Henry and Michael C. (2) to widen the margin to 7-4. After the bases were reloaded with no outs, Ethan followed with a RBI walk to plate James.

In the top of the fourth, O’s southpaw closer Josh (14) struck out two and picked off a Jays runner at third (to end the game) to seal the deal on a hard fought victory over their feathered divisional rivals.