TRAILING 7-4, THE SOX RALLY FOR THREE IN THE FINAL INNING TO EVEN THE SCORE WITH EXPOS AT DOMINICO FIELD 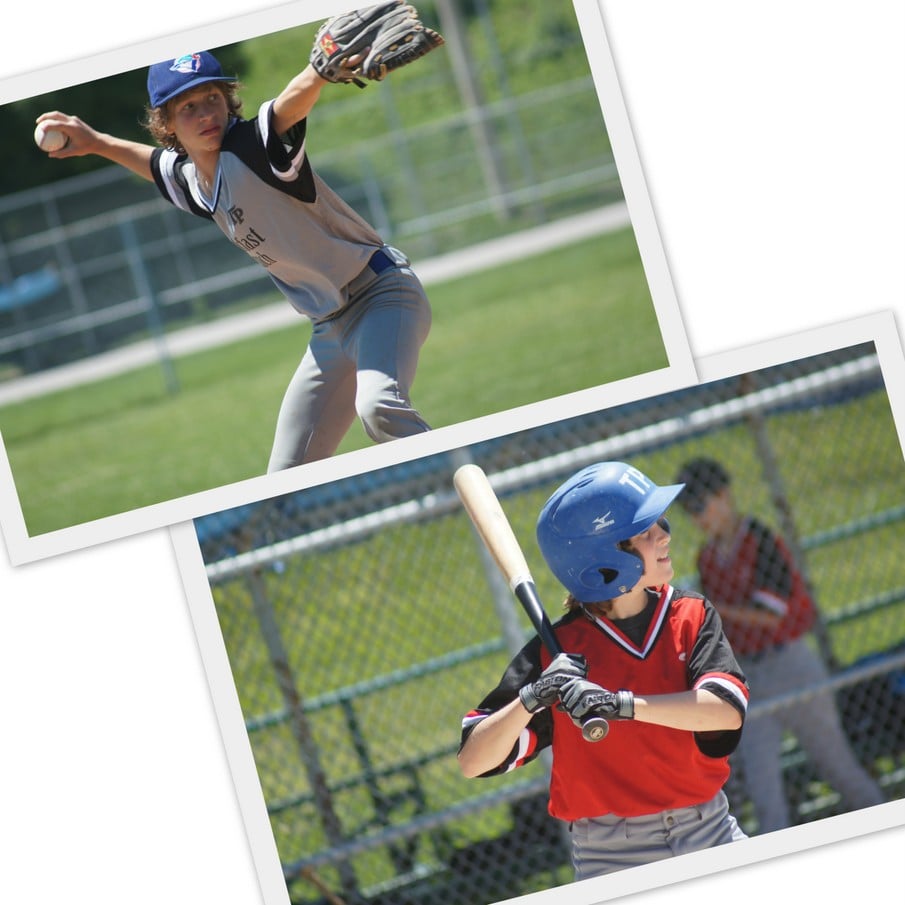 Top to bottom: White Sox reliever Zack (11) pitched a scoreless fourth inning while striking out three. Zack’s effort kept the deficit within three runs and allowed the White Sox to eventually tie the game; In three trips to the dish, Max (7) went 2 for 2 [two singles, sacrifice] with a run scored and 2 RBI’s to power the Expos offensive thrust.

Under a canopy of beautiful summer skies, the Expos and White Sox played to a 7-7 draw in four innings of Bantam Division action this afternoon at Dominico Field at Christie Pits.

It was a well played and entertaining affair between two talented teams on a magnificent day at the park as games resumed in the Bantam Division after an eleven day Canada Day hiatus.

The Expos jumped out to an early 1-0 lead in the top of the first. After back to back singles by Max (7) and Noah put two runners on base, Sasha (9) stroked a RBI single to bring Max home with the first run of the game. However, White Sox starter Jamie (15) extinguished the Expos threat by striking out three to close out the top half of the frame.

In the bottom of the first, the White Sox answered back with a run to even the proceedings. After Adam (5) had delivered a one out single, he advanced to third on a wild pitch and stolen base. Adam motored home on a dropped third strike to Victor (9) to score the White Sox’s first run of the game. Expos starter Sasha fanned a pair of Sox to keep the proceeding tied 1-1.

With diligence, the Expos responded with two in the top of the second to retake the lead 3-1. After Roberto (8) singled and Jack (1) reached base on a fielder’s choice to put two on base, Max delivered a one out RBI sacrifice to plate Roberto. Noah followed with a RBI single to score Jack.

White Sox call up Sam went 2 for 2 at the dish with two runs scored and 2 RBI’s.

The White Sox answered with a run in the bottom of the second to trim the deficit to one. After a one out double by Sam, he eventually came home to roost after a wild pitch and error by the Expos.

Exercising patience at the dish, the Expos made hay five walks to score four in the top of the third to widen their lead to 7-2. After Zoe (14), Alex (13) and Marcus (3) drew consecutive walks to lead off the inning and load the bases, Roberto drew a RBI walk to bring in Zoe. Jack followed with a RBI walk to score Alex.

At this juncture, Max stepped into the batter’s box and delivered a two RBI single that allowed Marcus and Roberto to come homeward.

The White Sox replied with a pair in the bottom of the third to cut the shortfall to three. After back to back leadoff singles by Victor (9) and Zack (11), both runners came homeward after a series od wild pitches by the Expos.

Expos reliever Max got himself out of a mojo jojo jam by initiating a pretty 1-3-2 double play to bring the inning to a close.

After loading the bases on three walks in the top of the fourth, White Sox reliever Zack pitched himself out of a sticky wicket by mowing down three Expos to keep them off the scoreboard and escape unscathed.

Refusing to accept defeat, the White Sox rallied for three runs in the bottom of the fourth to even the proceedings. Adam [walk], Victor [single] and Joseph (14) [walk] got on base to open the inning. With the bases loaded , Sam delivered a clutch one out two RBI single that allowed Adam and Victor to motor home and draw the Sox to within one run.

After a single by Jacob (6) reloaded the bases, Expos closer Jack induced Jamie to hit into a 1-2 fielder’s choice to record the second out on Joseph at home plate. Subsequently, an errant pickoff throw to third allowed Sam to motor home with the tying run.

With the game on the line, Jack mowed down the final White Sox batter to end the affair and preserve the tie.