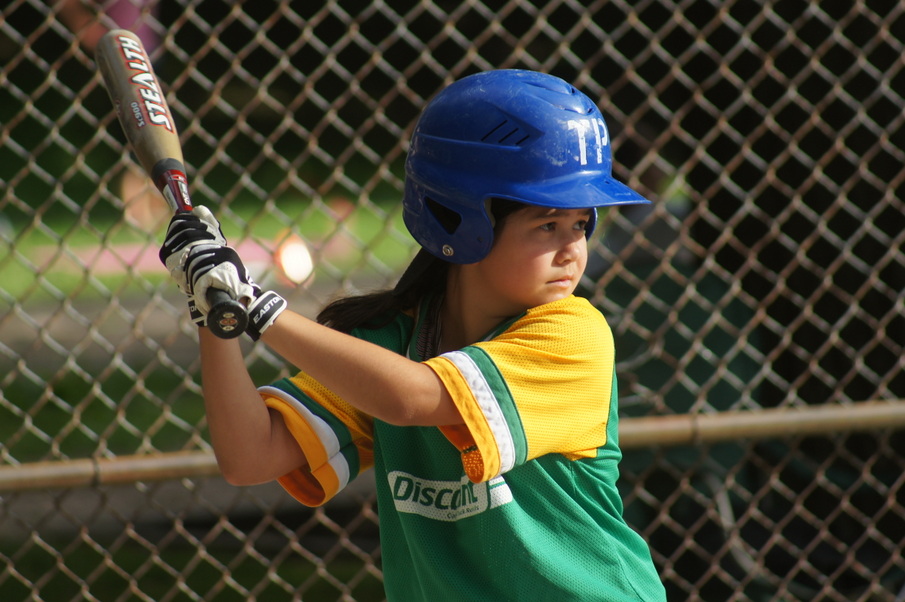 Georgia (7) delivered a key hit for the Mets and also made a super defensive rundown tag play at third against the Dodgers.

Amazingly, eleven Mets players were in attendance for the late July game under the lights at Diamond 2.

There was some fantastic Mets fielding which included a rundown tag at third by Georgia (7) and a terrific catch by Matthew (8).

All of the Mets players performed well by covering bases and backing up plays. The dedication to solid defensive play contributed to the team’s success.

Overall, it was a terrific night of baseball at TP.

And a special thanks to Lindsay Banks for the scorekeeping and the “Lets play two” quote.

The Dodgers and Mets treated the fans to a fabulous game during a lovely summer evening.

Three Dodgers were in attendance, although all of their teammates were there in spirit.  As a result, the Dodgers relied on a number of players from other teams to contribute to their effort.

Charlie (5), in noble fashion, attempted to extend a solid double into a triple. Drama ensued when he was caught in a run-down. Alas, Georgia (7), the third-base player for the Mets, put the decisive tag on his foot at the last second as he stretched it in search of the base.

Ibrahim, Josh, and Dante were consistent at the bat with RBIs. Devin (6) performed with solid pitching and a triple. Daniel, Alejandro (3) and Joshua R. were a force in the field.

Thanks to Andrew and Jeff who helped out with coaching.

The fans are looking forward to the next game!

In the grand tradition of TP House League Baseball, the Dodgers relied on the support of some fellow TP players in order to get the necessary numbers to field a team to play against the Mets.

As a result, the dugout was a hive of newly forming friendships. Not only were the Dodgers low in players, but two of their coaches were away. Diane took the helm while Geoff and Andrew pitched in.
With the game lasting 2 ½ innings, there was some good pitching (by the Mets), some good hitting (by the Dodgers) and a good time was had by all.
One of the joys of playing baseball at Christie Pits is that, while baseball games are being played, friendships are forged and the community is made stronger.
As the skies darkened and the game drew to a close, the Dodgers were on the short end of the stick.
At the end of the day, though, everyone went home a winner….