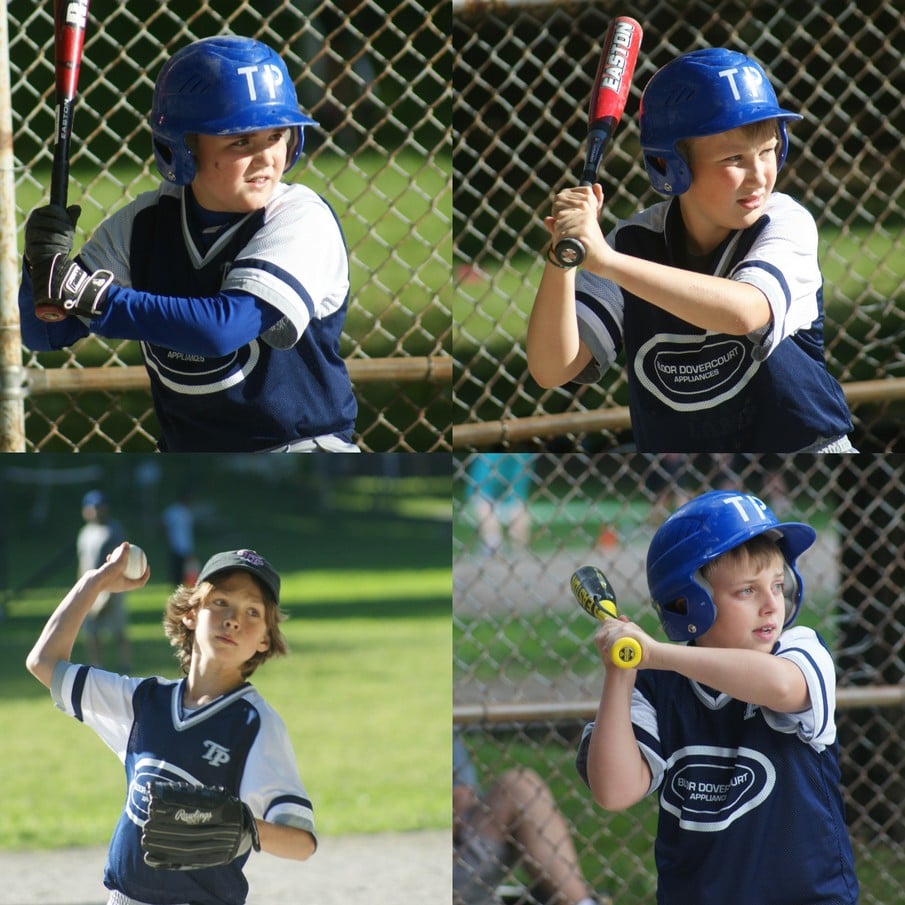 CLUBBING CUBBIES > Clockwise from top left: Alexander (2) delivered a RBI double in the first inning; Nick (14) powered a RBI double in the second. Nick also tossed a scoreless first inning; Julian M. (5) stroked a 2 RBI single for the Cubs in the second; Cubs closer Shamus (9) pitched a scoreless fourth while mowing down two Pirates to seal the deal on the 9-4 victory.

Beneath warm and humid skies that spanned the entire park, the Cubs defeated the Pirates 9-4 in 3 ½ innings of Mosquito Division play this evening at Christie Pits Diamond 3.

It was a Goldilocks evening at the Pits, not too hot, not too cold,  just right night as the Cubbies pawed their way to a 9-4 win over the visiting Pirates over 3 1/2 innings.

Cubs starter Nick (14), well rested after a two weeks at camp, looked solid pitching a scoreless first with a 1-3 putout, and strikeout.

The Cubs scored four in the bottom half with aggressive base running and RBI double by Alexander (2).

Hard throwing Cubs reliever Isaiah (10) allowed three runs after a 0-2 leadoff triple on a hanging curve by Pirate Charlie (3), but found his groove striking out three in the top of the second.

The Cubs continued to dance around the bases by scoring four more in the bottom of the second on a single by Shamus (9), RBI double by Nick (14), and Julian M (5) two run single.

The Cubs’ arms continued to power through the Buccaneers lineup with Michael (13) allowing one run on three strikeouts.

The Pirates ace took the mound in the bottom of the third giving the Cubs a taste of their own medicine, striking out three and allowing just one run as Alexander (2) scratched and clawed his way home after a single.

Cubs closer Shamus (9) shut down the Pirates in workmanlike style, pitching a shutout inning with two strikeouts to end the game.

Cubs pitchers recorded nine strikeouts and nine runs on five hits in an another impressive win.