IN A FOG LADENED ROCK ‘EM SOCK ‘EM BATTLE ROYALE, THE GRITTY O’s PREVAIL OVER THE MAJESTIC ROYALS AND EARN THE SWEET VICTORY AT CHRISTIE PITS 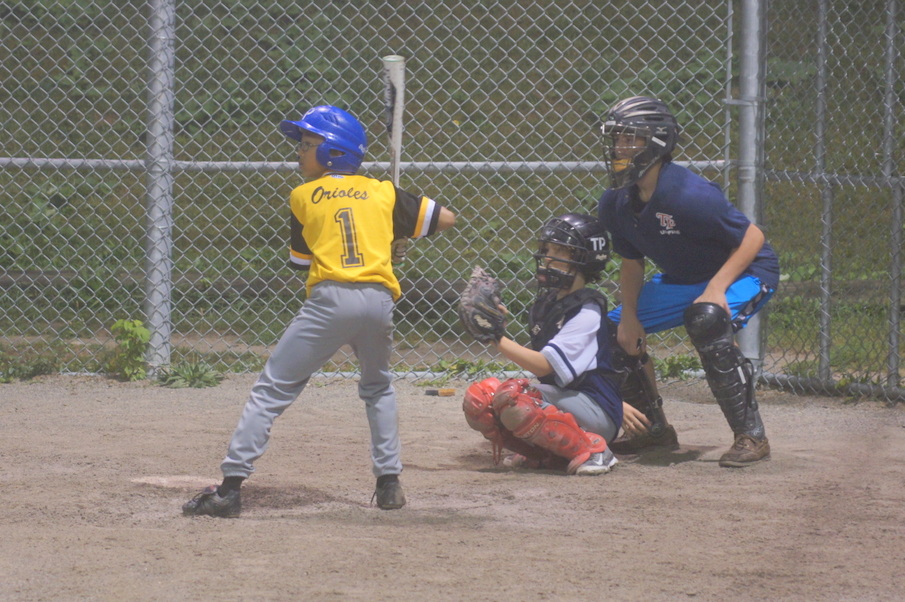 With the game tied 6-6; two O’s on base; and Royals catcher Cormac (8) and TP Umpire Avery Perri looking on, Jonathan (1) is poised to deliver a 2 RBI single in the top of the fourth inning that would propel the Orioles into an 8-6 lead at Christie Pits Diamond 2. Subsequently, Jonathan would steal two bases and come blazing home on a Royals error to score the Orioles eventual winning run.

Amidst a cotton candy swirl of fog that encircled the field, the Orioles prevailed for a 10-8 victory over the Royals in five innings of Peewee Division Round Robin Tournament action this evening at Christie Pits Diamond 2.

Despite the Foghorn Leghorn conditions, the game was a well played and entertaining affair between two well coached and talented teams. The two hour plus proceeding was rock ’em sock ’em seesaw game where both squads continually battled each other tooth and nail to shift the momentum in their favour and determine who would reign supreme.

Knotted 6-6 in the top of the fourth, the Orioles scored three runs to take the lead. After Cameron (6) singled and Michael (2) walked to lead off the inning and put two O’s runners on base, Jonathan (1) delivered a clutch two RBI single that allowed Cameron and Michael to motor home and put them up 8-6.

After stealing second, Jonathan made a brazen bid to grand theft third. With the throw from the Royals catcher sailing wide and down the third baseline, Jonathan picked himself off the wet gravel field and blazed homeward and extend the O’s advantage to 9-6.

However, the Royals replied to the O’s salvo with two runs in the bottom of the fourth to trim the deficit to one. After a pair of walks by Rory (6) and John Lee (14) to lead off the frame, Cormac delivered a one out RBI sacrifice hit that allowed Rory to motor homeward and pull the Royals within two. Julian (10) would follow with a RBI single to plate John Lee.

Clinging to a slender 9-8 lead and with the potential tying run standing seventy-five feet away, Orioles reliever Charley (4) dug deep into his reserves to strike out two to extinguish the Royals uprising.

The Orioles would tack on an insurance run in the top of the fifth to widen their lead to 10-8. After leading off the inning with a single and two stolen bases, Charley would come home to roost on a Royals error.

With some solid defensive help from his friends in the bottom of the fifth, Orioles closer Michael (7) would seal the deal on a hard fought victory by pitching a scoreless inning.

The Orioles (1-0) will resume Peewee Division round robin playoff action on Thursday, September 4 when they have a 7:45 p.m. rematch against the Royals (0-1) at Christie Pits Diamond 2.