TRAILING 9-6, DOWN TO THEIR LAST OUT AND WITH NO ONE ON BASE, THE O’s STAGE A DRAMATIC FOUR RUN RALLY IN THE FINAL INNING TO USURP THE ROYALS AT CHRISTIE PITS 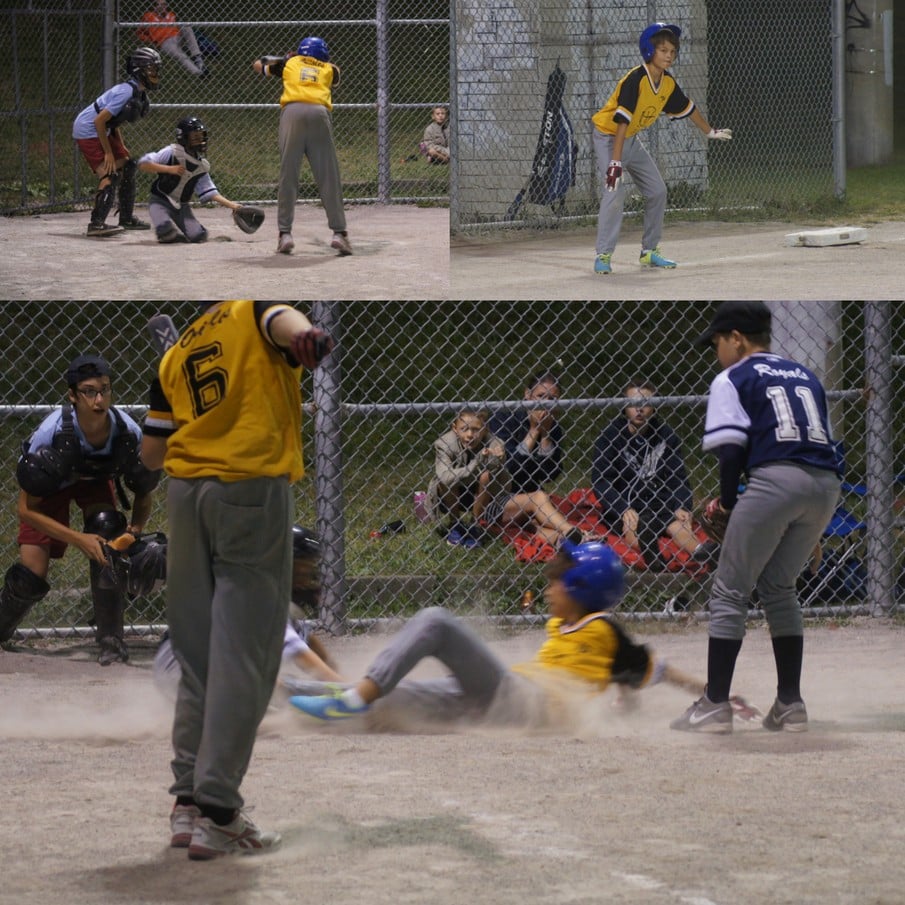 Clockwise from top left: With two outs and the game tied 9-9 in the bottom of the fifth, Cameron (6) of the Orioles avoids a pitch in the dirt that bounces away from Royals catcher Rory (6); As Rory rushed to retrieve the ball, Ethan (8) would take off from third like a barracuda in a bid to steal home; With TP Umpire Cooper Gödel, Cameron and Royals closer Angus (11) looking on, Ethan beats the tag from Rory and slides home safely to score the O’s winning run and complete a miracle four run comeback at Christie Pits Diamond 2.

Under the lights on a serene late summer night, the Orioles edged the Royals 10-9 in five dramatic innings of Peewee Division Round Robin Tournament play this evening at Christie Pits Diamond 2.

Trailing 9-6 and down to their last out, the gritty O’s staged a comeback for the ages in the bottom of the fifth.

With their backs to the wall and no one aboard, Charley (4) would single to keep the inning alive. Jacob (15) would follow with a single to centre. However, the Royals defense would a commit a series of faux pas that allowed Charley to score and Jacob to advance to third.

Down 9-7, Josh (14) powered a clutch RBI triple that allowed Jacob to motor home and trim the deficit to one.

With the tying run standing only seventy-five feet away and the game on the line, Ethan (8) would follow with a grace under pressure RBI single that brought Josh home to even the proceedings.

With Ethan dancing and prancing at third after stealing a pair of bases and Cameron (6) in the batter’s box, Royals closer Angus (11) would throw a pitch in the dirt that bounced away. As Royals catcher Rory (6) rushed to retrieve the ball, Ethan made his move to steal home like a barracuda. In a blink of an eye, Ethan just beat the catcher’s lunging tag attempt and slid home safely with the Orioles winning run.

The game was a hugely entertaining and epic round robin contest between two talented and well coached teams where both the Orioles and Royals played their hearts out and left everything they could give on the field of play.