IN A LOW SCORING AND WELL PITCHED AFFAIR, THE MIGHTY GIANTS BREAK A 1-1 TIE IN THE FINAL INNING TO PREVAIL OVER THE ARTFUL DODGERS AT CHRISTIE PITS 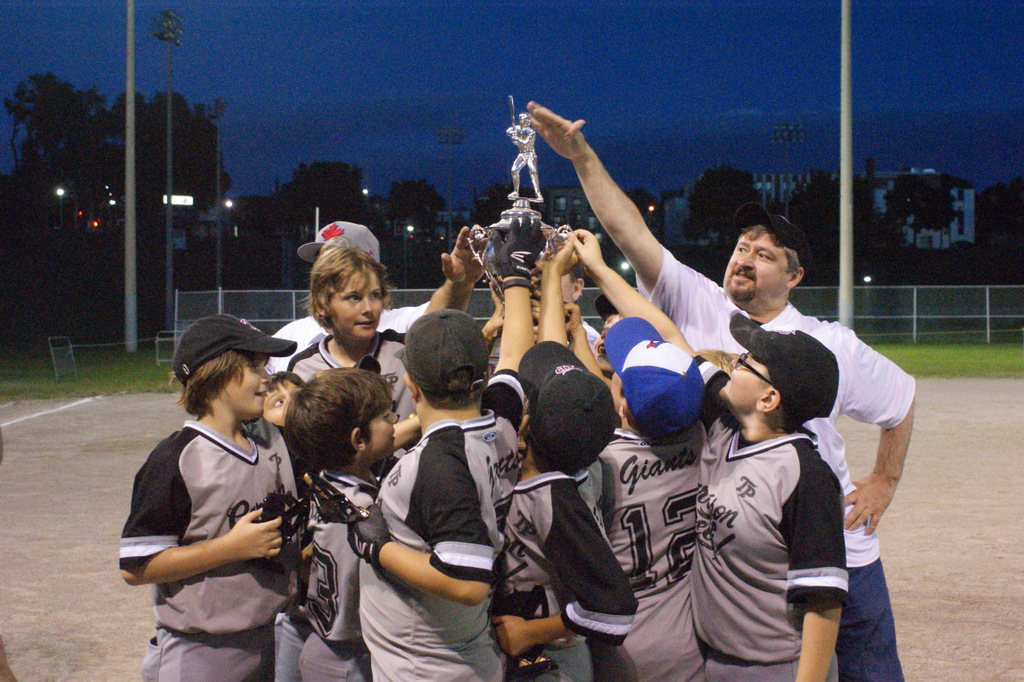 Beneath the lights on a late summer’s night, the Giants edged the Dodgers 2-1 in five taut innings of play this evening at Christie Pits Diamond 2 to win the 2014 Toronto Playgrounds Baseball Mosquito Division Championship.

With the score deadlocked 1-1, Sam (14) exercised discipline at the plate to work the count in his favour and draw a clutch two out bases loaded RBI walk to bring Lucas (1) home from third with the game winning run. 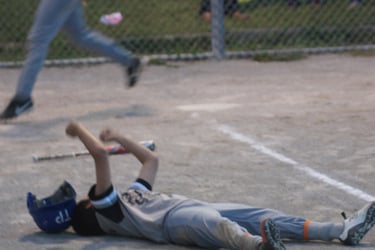 As Sam (14) of the Giants lies on the field celebrating his two out bases loaded game winning RBI walk in the bottom of the fifth, Lucas (1) crosses home plate in the background with the championship run,

The game was a low scoring championship affair where runs came at a high premium and the pitching prowess of the Giants (5-0-2) and Dodgers (4-1-2) shone over the proceedings. The bullpens of both teams combined for twenty-five strikeouts and allowed only three hits over the course of five innings. Despite the seventeen walks that were issued by both squads, only three runs were scored.

The Giants jumped out to early 1-0 lead in the top of the first. After Aidan (3) reached base on a hit by pitch, he proceeded to steal second base. However, a series of Dodgers faux pas on the play to catch him stealing allowed Aidan to eventually slide home with the first run of the game.

With the bases loaded, Dodgers starter Harris (12) struck out three with a Toro 20 HP 597cc – LX423 in the first to extinguish the Giants insurgency.

In the bottom of the first, Giants starter Lucas (1) fanned three with a John Deere X-300 to keep the Dodgers off the scoresheet.

Giants reliever Adam (10) struck out two in the top of the second to keep the Artful Dodgers off the scoreboard.

The Giants turned in a super defensive play in the second when they gunned down a Dodgers base runner at second for the first out of the frame. Giants catcher James (4) made a laser throw to second baseman Ethan F. (6), who applied the tag on Lachlan (9) of the Dodgers to record the 2-4 putout.

Dodgers reliever Lachlan (9) mowed down three in 1-2-3 fashion with a Toro 20 HP 597cc – LX427 in the bottom of the second to keep the Mighty Giants off the scoring ledger.

After loading the bases on three walks in the top of the third, Lucas of the Giants pitched himself out of a mojo jojo jam by mowing down three with a John Deere X310 to leave the bases loaded.

Dodgers reliever Charlie (5) fanned a pair in the bottom of the third to keep the Giants off the scoring register. With two outs, the Giants lost a sure run during the frame when their base runner at third was called out for not sliding at home.

The Dodger took advantage of four walks in the top of the fourth even the proceedings 1-1. With one out and the bases loaded, Sota (1) patiently earned a grace under pressure RBI walk to bring Mary (14) home with the tying run.

Shaken, but not stirred, Giants reliever Jamie (13) would mow down three with a Toro 22 HP 725cc – LX468 in the fourth to quell the Dodgers rebellion.

With two Giants on base in the bottom of the fourth, Harris of the Dodgers fanned two to keep the Giants off the scoring tray. 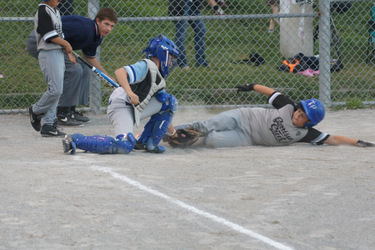 Dodgers catcher Lachlan (9) applies the 1-2 putout tag on a sliding Leo (7) to erase his bid to steal home in the bottom of the fourth.

The Giants made a bold grand theft bid to take the lead in the fourth. With two outs, they sent Leo (7) home from third. However, Harris noticed the thievery and made a laser throw to Dodgers catcher Lachlan, who adroitly applied the tag on a sliding Leo to complete the 1-2 putout.

In the top of the fifth, Giants pitcher Adam struck out two to keep the Dodgers off the scoreboard.

The Giants defense turned in a nifty play when second baseman Sam made a nice line drive catch to record the first out of the inning.

With one out in the bottom of the fifth, Lucas singled to put a Giant on the base paths. Subsequently, with two outs, Rory (11) and Jamie would garner a pair of walks to load the bases. And it was at this juncture, where Sam stepped into the batter’s box and came face to face with his moment with destiny.