TAKING CARE OF BUSINESS, THE HOMESTEADS DISPATCH THE LIZZIES 4-1 IN BEST OF SEVEN SERIES TO WIN CHAMPIONSHIP AT DOMINICO FIELD 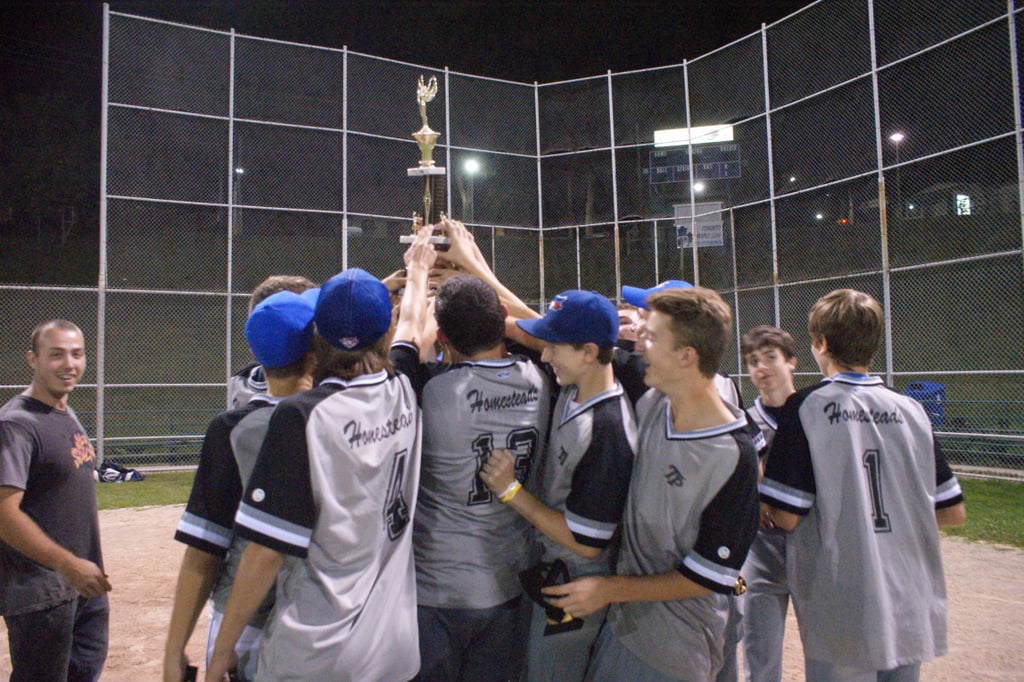 Beneath the incandescent lights on a quaint late summer night, the Homesteads defeated the Lizzies 9-5 in 5 ½ innings this evening at Dominico Field at Christie Pits to win the 2014 Toronto Playgrounds Baseball Midget Division Championship.

Under the expert stewardship of Head Coach Chris Novielli, the Homesteads took charge of the proceedings in Game Five to win the best of seven championship series 4-1 over the Lizzies.

With his team playing solid defense behind him, Homesteads starter Sam (3) struck out one in the top of the first to keep the Lizzies off the base paths.

In the bottom of the first, the Homesteads jumped out to an early 2-0 lead. After Alex had led off the frame with a single and two stolen bases, Joel (2) delivered a one out RBI single to bring Alex home with the opening run of the game. Subsequently, Joel would steal a pair of bases to reach third and come motoring homeward on a wild pitch.

Lizzies starter Cooper (7) would fan one in the first to keep the Homesteads at bay.

The Lizzies would answer with a run in the top of the second to trim the deficit to one. After Avery (13) reached base on a dropped third strike, he would eventually come home to roost after a stolen bases and a wild pitch.

Homesteads starter Sam would mow down two in the second to quell the Lizzies insurgency.

Lizzies reliever Stanny (8) threw a scoreless bottom of the second to keep the Homesteads off the scoring ledger.

Stanny was helped out by a Gold Glove defensive play by shortstop Chinua (15) during the inning. With one out and a Homesteads base runner on first, Chinua scooped up a hard hit grounder like a Kirby vacuum cleaner, stepped on second for the second out, and made a laser throw to first to complete the 6-3 double play.

Homesteads reliever Ethan (4) fanned one in the top of the third to keep the Lizzies off the scoresheet.

The Homesteads would add two in the bottom of the third to widen their lead to 4-1. After Cameron (6) had drawn a one out walk, he proceeded to grand theft a pair of bases to reach third. Cameron would subsequently blaze home on a wild pitch. Later, with a Homestead on third, James (1) stroked a RBI single to plate Ethan.

Lizzies reliever Aidan (14) would strike out two in the third to subdue the Homesteads uprising.

Down 3-1 in the championship series and facing elimination, the Lizzies gamely rallied with four runs in the top of the fourth to take a 5-4 lead. After a lead off single and stolen base by Stanny, Adrian followed with a RBI single to bring Stanny home. With one out, Avery stroked a RBI single to bring in Adrian and pull the Lizzies to within one.

However, the Homesteads answered back with four in the bottom of the fourth to retake the lead 8-5. After Liam (14) walked and Alex reached base on a dropped third strike to lead off the inning, Micah (10) delivered a RBI single that allowed Liam to come home and tie the game. Next, a wild pitch by the Lizzies would allow Alex to zoom home with the go ahead run.

With some solid defensive assistance from his friends, Homesteads reliever Alex (5) pitched a scoreless top of the fifth to preserve his team’s three run advantage.

The Homesteads tacked on an insurance run in the bottom of the third to widen their lead to 9-5. After a two out single and stolen base by Jasper (11), Marco (13) hit an eight mile high RBI single that dropped between third and second that allowed Jasper to motor home with another score.

With their backs to the wall, the Lizzies loaded the bases in the top of the sixth on a double by Stanny and a pair of walks by Adrian and Avery in a last ditch comeback bid. However, Homesteads pitcher Alex mowed down two Lizzies with a Toro 22 HP 725cc – LX468 and induced a pop up to first to seal the championship deal.