IN A TIGHT SEESAW BATTLE, TORONTO PLAYGROUNDS BREAKS A 5-5 DEADLOCK IN THE FINAL INNING TO WIN THEIR EBA SELECT LOOP SEASON OPENER AT CHRISTIE PITS 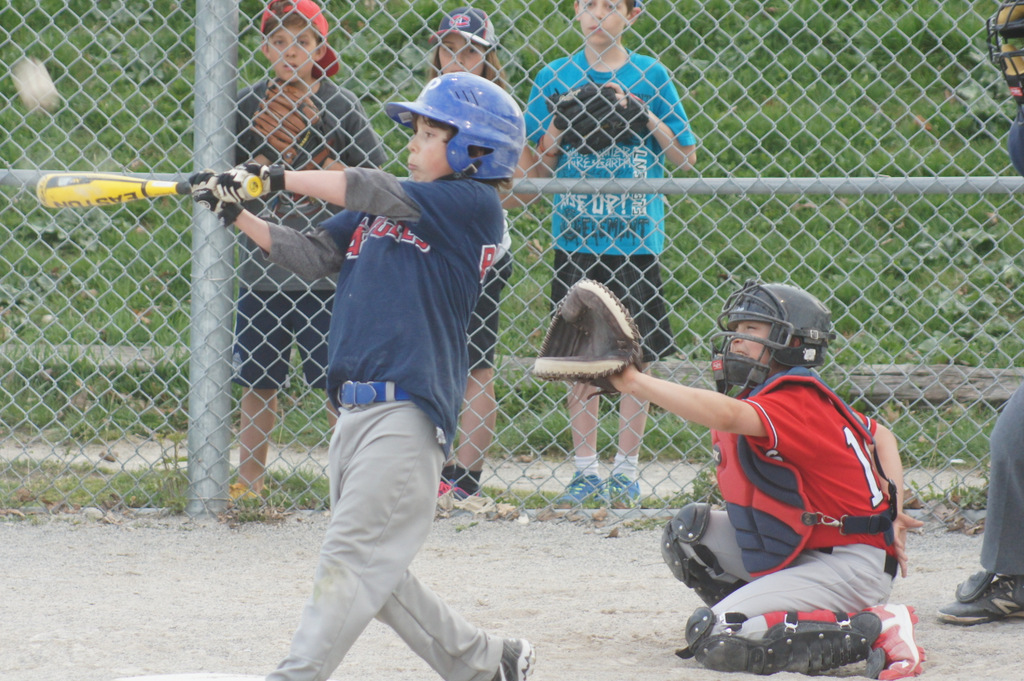 IN THE CLUTCH: With Annette catcher Brayden (10) looking on, Solly (27) launches a one out bases loaded RBI sacrifice hit to centre field in the bottom of the fifth inning that allowed Max (20) to come home from third with TP’s winning run over Annette at Christie Pits Diamond 2.

With the game knotted 5-5 and the bases loaded, Solly (27) delivered a clutch one out RBI sacrifice hit to centre field that allowed Max (20) to motor home from third with the go ahead (and winning) run. 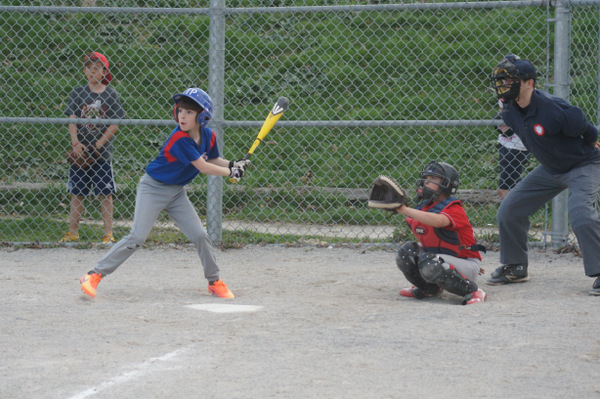 Jamie (52) sparked the TP attack by going 1 for 2 in three at bats [walk, single] with two runs scored and two RBI’s.

After Theo (17) drew a two out walk to reload the bases, Cameron (26) stroked a RBI single that allowed Lucas (1) to scamper home with an insurance run. With TP ahead 7-5, Maggie exercised discipline at the dish to draw a bases loaded RBI walk that shuffled Theo (17) homeward with another score that iced the game away.

In a nutshell, the game was an entertaining seesaw affair between two talented and well coached teams from start to finish.

Annette jumped out to an early 1-0 lead in the top of the first when leadoff batter Cyan (0) crushed an inside the park home run shot to the deep dish pizza nether regions of centre field.

Shaken, but not stirred, TP southpaw starter Jamie (52) found his groove and struck out the next three A’s in order to close out the inning.

The Mosquito Selects gamely rallied in the bottom of the first to even the proceedings 1-1. After drawing a one out walk, Jamie eventually reached third after a stolen base and a wild pitch. Taking advantage of an A’s error, Jamie zoomed home from third with the tying run.

However, Annette lefty starter Kieran (19) found his rhythm and fanned a pair to quell the TP insurgency in the first.

With some defensive help from his teammates, Mosquito Select reliever Charlie (19) struck out one in the top of the second to keep the A’s off the scoreboard.

A’s reliever Mathew (6) pitched himself out of a bases loaded jam in the bottom of the second when he mowed down two batters to keep Toronto Playgrounds off the scoreboard. Mathew also helped himself out mightily when he fell over backwards to make a nifty catch on a mile high pop up to record the third out of the frame.

In the top of the third, Annette retook the lead 2-1 after Cyan made hay of a TP error to blaze home from third with the go ahead run.

However, Mosquito Select reliever James (6) mowed down two A’s in the third to keep the A’s at bay. 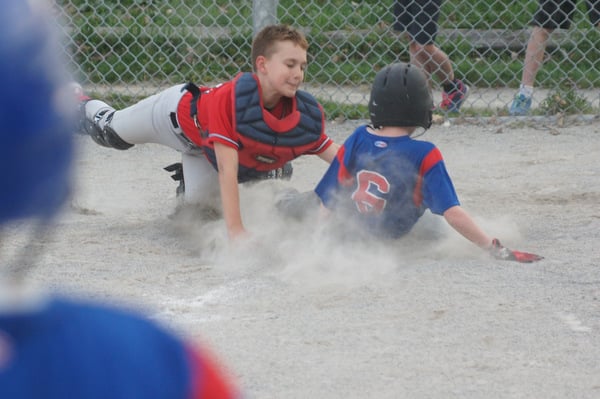 In a bang bang play at the plate, Annette catcher Brayden (10) tags out a sliding James (6) of TP in the bottom of the fifth.

Toronto Playgrounds answered back with authority in the bottom of the third when they scored three to take the lead 4-2. After Jashan (13) was hit by pitch and Charlie singled to put two runners on base to open the frame, Jamie stroked a 2 RBI single that allowed Jashan and Charlie to come homeward bound.

With TP up 3-2, Jamie pounced upon an Annette error to zoom homeward from third with another run.

TP reliever Theo (17) struck out one in the top of the fourth to keep Annette off the scoring ledger. Theo was also helped out during the inning by two Gold Glove plays from his teammates. First baseman Jamie made a nice pop up catch off the bat of Jonny (7) to record the first out.

Third baseman Cameron corralled a hard shot off the bat of Brayden (10) to initiate a 5-3 putout with first baseman Jamie for the second out.

In the top of the fourth, Toronto Playgrounds added a run to stretch their advantage to 5-2. After Cameron led off the inning with a single, he proceeded to steal second. Cameron eventually seized upon a pair of Annette errors to shimmy home with another score.

Annette reliever Jonny (7) struck out two to extinguish the TP uprising in the fourth.

However, the A’s staged a tenacious three run rally in the top of the fifth to even the proceedings 5-5. Key RBI hits from Cyan and Mathew propelled the Annette comeback.

With the two outs, the bases loaded and with the game tied and on the line, TP reliever Max (20) induced the next A’s batter to pop up and leave the bases juiced.

Toronto Playgrounds proceeded to load the bases with one out in the bottom of the fifth. After Max had drawn a walk, Lucas singled to put two ducks on the pond. Theo followed suit with a walk to load the bases.

And it was at this juncture in the proceedings when Solly stepped into the batter’s box and came face to face with his moment with destiny.

The TP Mosquito Selects (1-0) hit the road next week for their next EBA Select Loop game when they travel to Smythe Park to play against the York Riverdogs on Sunday, May 10 at 6:00 p.m.