TRAILING 14-0, TORONTO PLAYGROUNDS STORM BACK WITH A TWENTY RUN VENGEANCE IN THE FINAL INNING TO LASSO THE RANGERS AND WIN THEIR SECOND GAME OF THE EBA SELECT LOOP SEASON 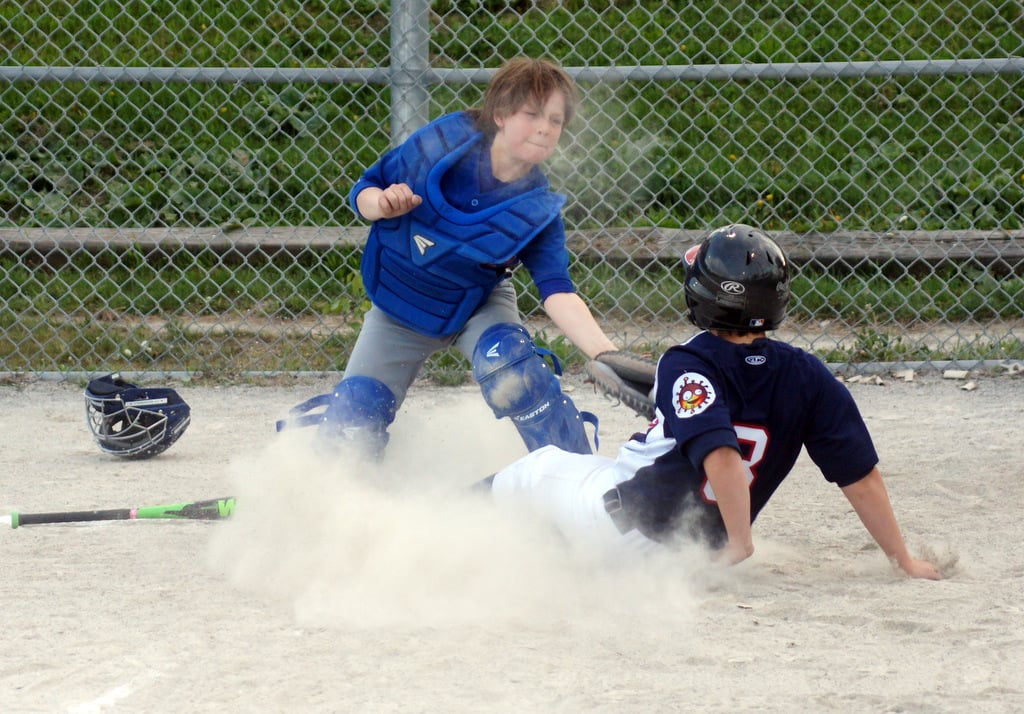 After receiving the throw from relief pitcher Louis (16), TP catcher Jake (30) applies the tag on a sliding Julia (3) of the Etobicoke Rangers to record the second out of the second inning at Christie Pits Diamond 2.

Beneath a ceiling of tranquil Spring skies, our Toronto Playgrounds Peewee Selects defeated the Etobicoke Rangers 20-14 in three innings of Etobicoke Baseball Association (EBA) Select action this evening at Christie Pits Diamond 2 to earn their second victory of the season.

In a nutshell, the entertaining proceeding by two talented and well coached teams was a wild west affair which reaffirmed Yogi Berra’s famous saying that a baseball game ‘ain’t over till it’s over’.

Despite being down 14-0 after 2 ½ innings, the nine gutsy players on the TP squad refused to accept their fate as they gamely rallied for an inexplicable twenty runs in the bottom of the third to snatch victory from the jaws of defeat.

In a miracle comeback for the ages, Toronto Playgrounds sent twenty-six batters to the plate during the frame as they cobbled together eight key hits and twelve walks against three Rangers relievers to overtake their opponent.

Here is a capsule anatomy of the rally:

In the top of the first, Etobicoke bolted out of the gates to take an early 3-0 lead. Exercising discipline at the dish, the Rangers opened the frame with three consecutive walks to load the bases. With one out, Hannah (43) delivered a RBI single to deliver Sandrine (13) home. Following a RBI walk by Gigi (47) that brought Destiny (29) home to roost, Aiden (59) stroked a RBI single to bring Victoria (37) homeward bound.

Shaken, but not stirred, TP starter Daniel (50) found the groove and struck out a pair of Rangers to quell the uprising.

TP minimized the damage during the inning on a nifty 9-6-2 putout play. On Aiden’s hit to right field, Etobicoke decided to wave Hannah home. After receiving the throw from right fielder Aaron (54), shortstop Quinn (13) made a laser throw to catcher Jake (30), who deftly applied the tag on a sliding Hannah to record the second out.

Taking no prisoners, Etobicoke starter Destiny (29) mowed down a pair in the bottom of the first to keep TP off the scoreboard.

The Rangers sent seventeen batters to the dish in the top half of the second as they exploded for eleven runs to widen their advantage to 14-0. With two runners on base and no outs, Flynn (31) ignited the fuse on the Etobicoke offensive explosion with a RBI sacrifice hit that brought Elena (17) home from third.

Leading 4-0, Etobicoke followed with seven hits and four walks to put more kerosene on the fire. The Rangers also made mincemeat of two TP errors to put the pedal to the metal during the frame. Keying the Etobicoke offensive fireworks were respective RBI hits from Claire (41), Sandrine, Hannah, Gigi and Julia (3). Aiden chipped in with a 2 RBI single.

Backed by some solid defensive help from her friends, Rangers starter Destiny subdued the TP insurgency in the bottom of the second to keep them off the scoresheet.

In the top of the third, the defensive prowess of TP shone bright as day as they set down Etobicoke in 1-2-3 fashion on three stellar Gold Glove plays to silence the Rangers offensive machine.

TP Shortstop Daniel combined with first baseman Aaron on a breathtaking 6-3 play to record the first out of the inning. Next, second baseman Leandro (10) battled the dimming sky to catch a mile high pop up for the second out. However, the piece de resistance followed when TP reliever Louis (16) fell over backwards to snare a searing line drive off the bat of Logan (54) to record the third out of the frame.