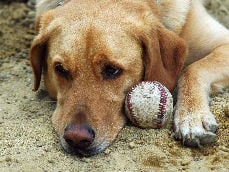 The dog days of summer continue to afflict the Mosquito Division for the second week in a row as low player turnout affected two scheduled games today.

Player turnout was abysmal on Diamond # 3 (Dodgers and Lizzies) and Bickford South (Cardinals and Giants). The TP Baseball Committee was forced to cancel the game at Bickford and shuffle the few players who showed up for their scheduled game up to Diamond # 3 to create sufficient numbers for a game.

In the end, the Cardinals & Pirates All Stars edged the Dodgers & Lizzies All Stars 6-5 in three innings of play.

In the only Mosquito Division game where both teams had enough players, the Cubs and Giants played to a 7-7 tie in four innings of play at Diamond # 2.

Our TP Cub Reporter twittered that the Giants rallied from a three run deficit in the bottom half of the fourth inning to tie the game. Daniel of the Giants delivered a clutch two run single which brought in the tying run.