ORIOLES POWER THEIR WAY TO VICTORY 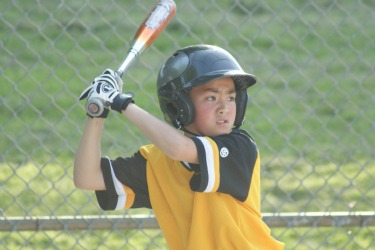 Iain (4) of the Orioles drew two walks and went 1 for 1 at the dish while scoring three times.

The Orioles powered their way to a 10-6 Peewee Division victory over the Jays in four innings of play at Diamond # 3 today.

Using a combination of solid pitching and opportune offense, the Orioles made the most of the chances that were handed to them.

After a shaky first inning, in which they gave up four runs to the Jays, a strong O’s pitching brigade of Connor (12) and Avery (8) combined to limit the potent Jays offense to only two more runs for the remainder of the game.

Meanwhile, the Orioles offense stormed back from a 4-3 deficit in the second inning to score three runs in the third and four more in the fourth to take command of the game.