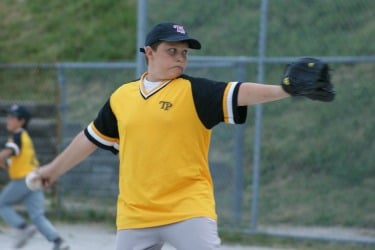 Connor (12) of the Orioles pitched two scoreless innings for the Lizzorioles.

As we trek into the dog days of summer, player participation numbers were low for the four Peewee Division teams that were scheduled to play the early evening games today at Christie Pits.

After some creative player reformulation, the TP Baseball Committee was able to fuse a pair of viable team entities together.

In the end, the Lizzorioles defeated the Red Royals 11-8.

Highlight of the game was a two inning shutout pitching performance by Connor (12) of the (Lizz)Orioles.

The Yankees defeated the Jays 9-3 in the Peewee Division nightcap game at Christie Pits Diamond # 2 late this evening.

It was a solid team victory by the Yankees both offensively and defensively. The two prime highlights of the game was a brilliant throw from right field by Matthew (13) of the Yankees to cut down a runner at the plate and a very good inning of Yankee pitching by Jacob (5) to close out the game and the victory.