IN A THRILLING BARNBURNER, TORONTO PLAYGROUNDS WINS THIRD GAME OF THE SEASON AT SMYTHE PARK 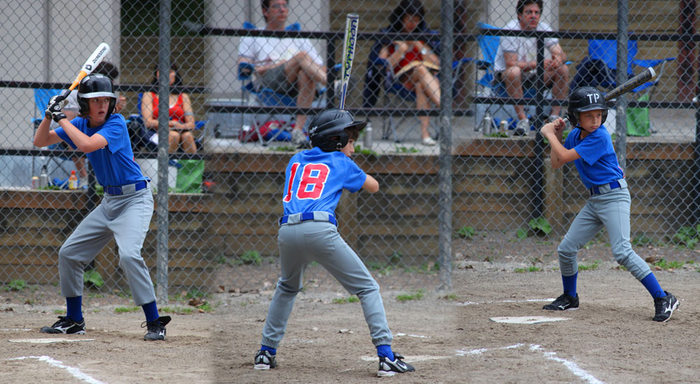 TP Closer Brian (25) pitched 2/3 of an inning to seal the deal against York.

In a thrilling barnburner at Smythe Park this evening, the Toronto Playgrounds Mosquito Select team scored three runs in the the final inning to prevail over York 15-12 in six innings to notch their third win of the EBA Mosquito Select Loop season.

The Mosquito Selects jumped out of the starting gate by scoring four in the top of the first to sprint ahead 4-0. With two TP baserunners on base as a result of walks, Sasha (13) delivered a clutch two run double to centrefield to bring them homeward; Zachary (32) immediately followed with a rbi single that brought Sasha home; Adam (18) hit a sacrifice to first to allow Zachary to come home.

Mosquito Select starting pitcher Max (7) icily struck out the side in the bottom of the first to keep York off the scoresheet.

TP added two more in the top of the second to widen their lead to 6-0. Brian (25) singled and Angus (12) walked to lead off the inning. After some steals, Brian took advantage of a dropped third strike throw to first and scored from third; Oliver (9) hit a rbi double that allowed Angus to come home.

In the bottom of the second, the York offense got in gear as they used a pair of back to back doubles to score two and whittle the deficit to four.

The inning could have been more damaging to TP if not for two great defensive plays. Brian adroitly snagged a SCREAMING liner off the bat of York batter Anthony to record the first out. On the second out, Sasha gunned down a York baserunner attempting to steal third.

The Mosquito Selects offensive engine continued to churn in hyperdrive in the top of the third as they scored four more to push their lead to 10-2. After Jeremy (11) led off the inning with a single and Ben (5) followed with a walk, Max stroked a two run double to bring them home; Sasha followed with a rbi double that brought Max in; a single by Adam brought Sasha home.

However, the potent York offense roared to life in the bottom of the third as they scored five runs to trail 10-7. York used some strong hitting and took advantage of some TP defensive miscues to get back into the game.

TP was able to score one run, on an Angus rbi single, in the top of the fourt, before York reliever Anthony struck out two Mosquito Selects to close out the inning.

In the bottom of the fourth, TP reliever Ben (5) cooled down the York offensive surge by pitching a 1-2-3 inning with two strikeouts.

The Mosquito Selects added another run to the ledger in the top of the fifth. Jeremy singled and promptly stole second and third. Jeremy eventually scored on a wild pitch to increase the lead to 12-7.

Refusing to accept defeat, the York offense tenaciously rallied for five runs to tie the game 12-12. The key blow was a two run double by York batter Anthony.

However, TP punched right back in the top of the sixth as Zachary, Adam and Kyle (1) delivered consecutive singles to load the bases for the Mosquito Selects. A series of walks and a single allowed the Mosquito Selects to score three runs and retake the lead.

Ahead 15-12, TP reliever Ben (5) struck out one York batter to begin the bottom of the sixth. After ceding a single, Ben was removed because of pitch count rules, and Closer Brian (25) was brought in from the bullpen. Brian cooly got the next two outs on a strikeout and a ground out to pick up the save and seal the deal for TP.

The Mosquito Selects (3-4-1) take a break from the EBA circuit to participate in the Vaughan Mosquito Select Baseball Tournament this weekend (June 22-24). GO! TP! GO!!!