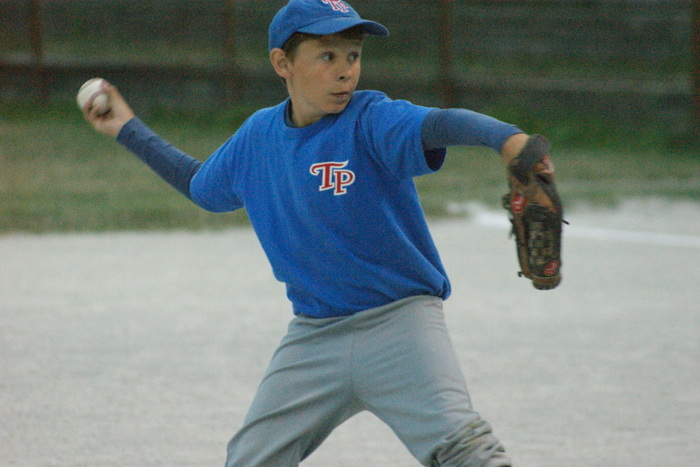 GAME MVP > Protecting a one run lead, Keegan (44) closes out the win by striking out three York batters and earning the save. Keegan also went 3 for 3 at the dish with three RBI’s and three runs scored. Keegan was a home run shy of the cycle (single, triple and double). Plus, he also scored the tying run in the fourth with a deft slide at home to avoid the tag.

Under serene summer skies this evening at Christie Pits Diamond 2, the Toronto Playgrounds Peewee Select team edged York 11-10 in a 4 ½ inning nailbiting thriller to win their ninth game of the EBA Select season.

Harry (9) delivered the game winning single in the fourth inning.

Trailing 10-9 in the bottom of the fourth, the Peewee Selects rallied in dramatic fashion with two runs to retake the lead. Keegan (44) led off the inning with a double, and immediately stole third. With one out, Victor (23) drew a walk. In a double steal attempt, Keegan came charging home from third and just evaded a tag from the York catcher to score the tying run in a close play at the plate.

John (33) and Ben (4) followed with back to back walks to load the bases. With one out and the bases juiced, Harry (9) hit a hard chopper that York’s third baseman was unable to field cleanly. Harry’s single brought in Victor with the go ahead and subsequent winning run.

Leading 11-10 in the top of the fourth, TP closer Keegan struck out the first two York batters that he faced. Elliot (5) of York singled and eventually stole second. With the tying run in scoring position, Keegan cooly struck out Ian (15) of York to earn the the save and seal the deal. 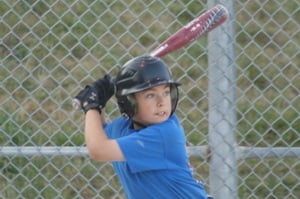 The Peewee Selects were full measure for their hard fought victory as they played with a shortened bench of ten players, with many of their most talented players away on summer vaction. However, it’s a testament to the depth and fortitude of this talented squad that they stepped up and exacted a measure of revenge in beating the only EBA team that has defeated them this season. The victory was extra sweet because it was accomplished without some of TP’s big cogs in the lineup.

TP starting pitcher John (33) tossed a 1-2-3 top of the first with one strikeout to keep York off the scoreboard.

York answered back with two runs in the top half of the second to even the match 2-2.

The TP offense went right back to work in the bottom of the second and scored five to surge ahead 7-2. Ben and Harry lead off the inning with back to back walks. A one out sacrifice hit by Justin (20) brought Ben home with the go ahead run. With two outs, David (13) followed with a single to bring in Harry. Simon immediately followed with a double to put TP baserunners at third and second. At this point, Keegan delivered a clutch two run triple that brought David and Simon homeward bound.

Still with two outs and ahead 6-2, Marcus and Victor garnered back to back walks to load the bases. John lashed a single to bring Keegan home to close out the scoring for the inning.

However, a rough and tough York team battled back with gumption and four runs in the top of the third to cut the margin to 7-6.

The Peewee Select offense went right back to work in the bottom of the third to score two runs and widen their lead to 9-6. After Ben was hit by a pitch to lead off the inning, he immediately stole second. With one out, Jamie (2) hit a double to cash in Ben. With two outs, David delivered a clutch triple to bring Jamie home.

Once again, York refused to wave the white flag of surrender and stormed back with dogged tenacity and four runs to take the lead 10-9.

It was at this juncture in the proceedings where Toronto Playgrounds stared destiny in the face and seized the moment.

The Toronto Playgrounds Game MVP was Keegan (44) for his all around all star performance against York. Not only did Keegan go 3 for 3 at the plate with 3 rbi’s and scoring three runs, but he was a home run shy of the Cycle, with a single, triple and double to his credit. Keegan also scored the crucial tying run in the fourth with a deft slide at home to avoid the York catcher’s tag in a close play at the plate. Additionally, Keegan also closed out the victory in the fifth by striking out three York batters.

“Keegan was a home run away from the cycle and closed the game beautifully. He’s been a real leader for the team of late, on and off the field. It seems a new leader steps up all the time. Yet, no one feels that their toes are being stepped on. It makes my job easy.”

The Peewee Selects (9-1) play their next game on Wednesday, July 18 when they travel to Pelmo Park to play Weston at 7 p.m.