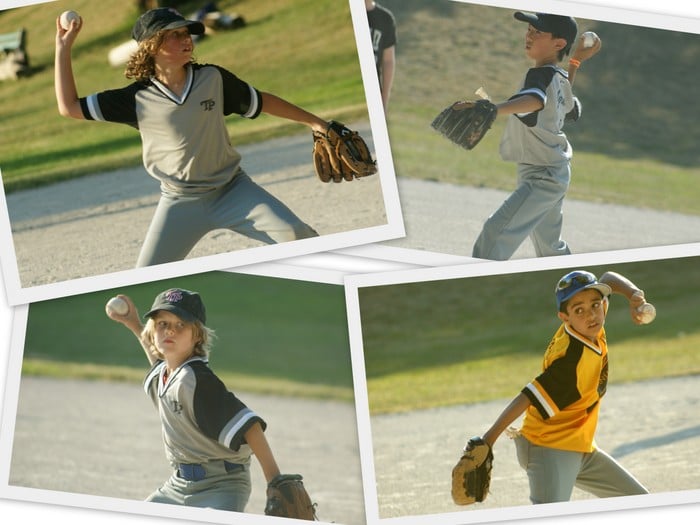 Beneath the unrelenting rays of the hot and humid sun on the Bickford Park South Sea this evening, the Giants tamed the Pirates 8-4 in 3 ½ innings of Mosquito Division play. 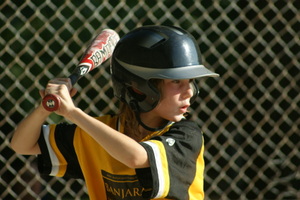 The mighty Giants used an elixir of strong pitching, opportune offense and a BIG defensive play to trump the swashbuckling Pirates.

In the top of the first, Giants starting pitcher Jonathan (1) limited the potent Bucs offense to a run. After Jasper (13) of the Pirates led off with a walk, Nigel (6) delivered a clutch double to bring him home.

The Giants offense took advantage of six walks and a single issued by the Pirates as they answered back in the bottom of the first with four runs to surge ahead 4-1.

Giants reliever Noel (10) pitched a scoreless top of the second to keep the Bucs offense anchored at bay. After issuing a lead off walk to Piper (2), Noel proceeded to strike out the next three Pirates in order.

The Giants made the most of their opportunities in the bottom of the second to score four and widen their lead to 8-1. A combination of six walks and some defensive errors parlayed by the Buccaneers allowed the Giants to pillage the treasure chest. 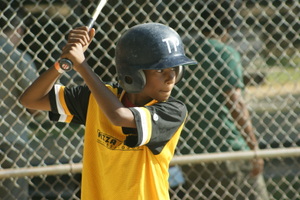 Nigel (6) of the Pirates stroked a RBI double in the first inning.

With their proud ship under seige, the gnarly Buccaneers gamely fought back with two runs in the top of the third to trim the margin to 8-3. With two outs and two Pirates baserunners aboard, Piper (2) delivered a clutch single to bring Jian (4) home. Quinn (12) immediately followed with a double to centre field that allowed Aaron (5) to score.

As Aaron touched home plate, a hard chugging Piper got the wave from the Pirates third base coach to motor home. However, the Giants executed the defensive play of the game to douse the Bucs comeback. Centre fielder Cormac (6) fielded Quinn’s double and made a blazing throw to Giants reliever Maxwell (7). Maxwell cooly threw a laser strike to Giants catcher Noel (10), who blocked the plate and adroitly applied the tag on Piper for the third out in a mojo jojo bang bang play at the dish. A perfect 8-1-2 defensive masterpiece!

In the bottom of the third, Pirates southpaw reliever Jian (4) cooled down the Giants offensive jets by throwing a scoreless inning. After allowing a leadoff single to Christian (4), Jian icily struck out the next three Giants batters.

The Pirates refused to wave the white flag of surrender in the top of the fourth as they scored one run to trim the deficit to four. With one out, Daniel (3) came homeward bound on a wild pitch.

However, with two Bucs on base and one out, Giants pitcher Noel regained his composure and recorded the final two outs in workmanlike fashion on a strikeout and groundout to seal the deal for his team.

EXTRA INNINGS: Kudos to Noel (10) of the Giants for pitching a solid two innings. Noel only gave up one run, while allowing no hits, and striking out four Pirates (2 IP; 0 R; 0 H; 4 W; 4 K). He also went 1 for 2 at the dish with a RBI; Kudos to Pirates reliever Jian (4) for pitching a scoreless third inning while mowing down four Giants batters (1 IP; 0 R; 1 H; 0 W; 3 K). Jian also went 2 for 2 at the dish along with a walk and a RBI; Kudos to Cubs starter Jonathan (1) for pitching a solid first inning while giving up only one run; Kudos to Cubs reliever Maxwell (7) for thrwoing a workmanlike third inning in only allowing two runs while fanning one Pirate (1 IP; 2 R; 2 H; 1 W; 1 K); Kudos to Pirates Nigel (6) and Quinn (13) for respectively delivering clutch RBI doubles for their team; and a special kudos to Cormac (6), Maxwell and Noel of the Giants for their BIG 8-1-2 putout in the third inning.