Clockwise from top left: Giorgio (8) of the Lizzies went 1 for 2 at the plate (double) with 4 RBI’s; Lizzies leadoff hitter Aster (10) scored two runs while earning three walks in three plate appearances; Salim (15) had a 2 RBI triple and a RBI sacrifice in two trips to the dish; A’s reliever Sarah (13) pitched a strong second inning where she allowed only two runs while striking out two Lizzies.

Under humid skies at Dominico Field at Christie Pits this afternoon, the Lizzies edged the A’s 7-6 in a three inning Bantam Division nailbiter. 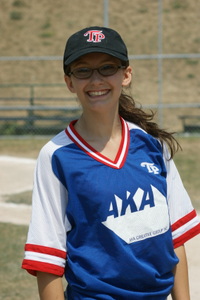 Natasha (11) of the Lizzies celebrated her 15th Birthday with a great game. Natasha scored two runs and garnered three walks on three trips to the plate. She was also the catalyst in a 4-3 putout in the first inning when she was at second base.

With one out and the game tied 6-6 in the bottom of the fourth, Jeremy (7) of the Lizzies came blazing home with the winning run on a wild pitch by the A’s.

The game was a close affair from start to finish, as players from both teams not only battled amongst themselves, but also had to battle with the very humid conditions at Christie Pits.

In the top of the first, the A’s bolted out of the gates with two runs. Brendan (10) led off the inning with a walk and promptly stole two bases. On his steal of third, he forced a Lizzies throwing error, which allowed him to trot home with the first run of the game. After the A’s had loaded the bases, Salim (15) hit a 4-3 sacrifice which brought Sarah (13) home from third. On the play, Lizzies second baseman Natasha (11) cooly fielded the ball like a Kirby vacuum cleaner and threw a strike to first baseman Casey (+) to record the out.

The Lizzies immediately answered back with three runs in the bottom of the first to take the lead 3-2. With the bases loaded and one out, Giorgio (8) hit into a fielder’s choice to allow Aster (10) to come home with the Lizzies first run of the game. Subsequent throwing errors by the A’s allowed Natasha and Giorgio to come homeward bound.

Lizzies reliever Giorgio (8) pitched a solid top half of the second as he kept the A’s potent offense off the scoresheet with three strikeouts.

The Lizzies offense went back to work in the bottom of the second as they scored two to widen their lead to 5-2. With two outs and two Lizzies on base, Giorgio stroked a clutch two run double which brought Sam (3) and Natasha home.

Refusing to wave the white flag of surrender, the A’s regrouped in the top of the third to rally for four runs to retake the lead 6-5. With no outs and two Athletics on base, Salim delivered a clutch two run triple to bring in Georgia (3) and Tensen (11) to trim the deficit to one. After a walk to Brendan, Salim came sliding home with the tying run on a Lizzies throwing error. Brendan eventually came home on another Lizzies error to put the A’s in the lead.

In the bottom of the third, the Lizzies answered back with a rally attempt of their own. Aster led off the inning with a walk. With one out, Jeremy drew a walk. Subsequent steals by Aster and Jeremy put them at third and second respectively. A wild pitch by the A’s allowed Aster to slide home with the tying run and Jeremy to advance to third.

At this moment in the game, Jeremy stood at third base and came face to face with destiny.