IN AN ORTHNITHOLOGICAL SHOWDOWN, THE JAYS GROUND THE O’s AT CHRISTIE PITS DIAMOND 2 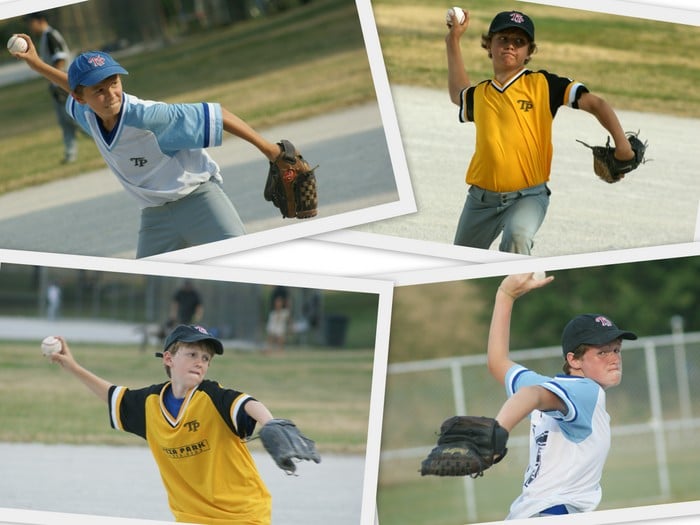 PRIME TIME PLAYERS > Clockwise from top left: Jays starter Keegan (2) pitched two stellar innings in allowing one run while striking out five Orioles; Orioles starter Simon (5) threw a solid inning in allowing one run while striking out one. Simon also initiated a 1-5 pickoff in the first; Jays reliever Sam (15) tossed a powerful third inning where he allowed one run, struck out two, and hit two Orioles batters by pitch; Orioles reliever Campbell (6) tossed a workmanlike fourth where he allowed one run while fanning one. Campbell also picked off TWO Jays baserunners!!!

Beneath a blanket of humidity at Christie Pits Diamond 2 this evening, the Jays grounded the Orioles 8-4 in four innings of Peewee Division action. 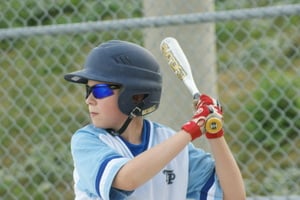 The Jays used a formula of solid pitching and effective offense to triumph over their orthnithological division rivals.

In the top of the first, the Jays came out of the gates with a run to leap ahead 1-0. With two outs, Jacob (11) singled and subsequently stole two bases. Adam (5) stroked a clutch RBI single to bring Jacob home. After Adam had stolen a pair of bases to reach third, the inning ended with a great defensive by the O’s. Orioles starting pitcher Simon (5) stealthily threw a strike to third baseman Luke (5) who applied the tag on a wandering Adam to record a pick off at third base.

The Orioles answered back with a run in the bottom half of the first. Campbell (6) drew a two out walk and proceeded to steal two bases to get to third. On a Jays throwing error, Campbell alertly blazed home to score the tying run.

The Jays offense went back to work in the top of the second as they scored two to take the lead 3-1. After Lucas (7) had led off the inning with a single, Sam (15) stroked a RBI double to bring him home. A subsequent one out RBI sacrifice hit by Augustino (9) brought Sam home.

Adam (5) of the Jays went 2 for 2 at the dish with a RBI, run scored, and four stolen bases. Adam also played another solid game as the Jays backstop.

In solid fashion, Jays starting pitcher Keegan (2)  struck out three in the bottom of the second to keep the Orioles offense perched in their nests and off the scoresheet.

The Jays took flight in the top of the third as they scored four to widen their lead to 7-1. After Keegan had led off the inning with a single and steal of second, Jacob stroked a RBI double to cash him in. With one out and two Jays baserunners on base, Sam delivered a clutch two RBI double to bring home Adam and Lucas. Luke (10) followed with a RBI single to bring Sam home.

The O’s fought back with one run in the bottom of the third to trim the deficit to five. After Taraak (8) was hit by a pitch, he proceeded to steal two bases to reach third. Taraak zoomed home on a wild pitch by the Jays.

The Jays scored an insurance run in the top of the fourth to increase their lead to 8-2. Ben (4) led off the inning with a single and proceeded to steal two bases to reach third. Ben came home on a dropped third strike to Augustino.

The inning was highlighted by two great pickoff plays by Orioles reliever Campbell (6). With one out and a runner at first, Campbell slyly threw a laser beam to O’s first baseman Simon who quickly applied the tag on an unsuspecting Michael (7) to record the second out. On the second pickoff, Campbell guilefully threw a strike to third baseman Luke who applied the tag on a napping Sajith (8) to record the third out.

With their feathers ruffled, the Orioles gamely battled back with two runs in the bottom of the fourth to trim the margin to 8-4. Luke and Campbell led off the inning respectively with a single and walk.With two outs and two runners on base, Simon stroked a clutch RBI single to bring Luke home. A subsequent Jays error allowed Campbell to hustle home. However, Jays closer Ben eventually recorded the final out to seal the deal.