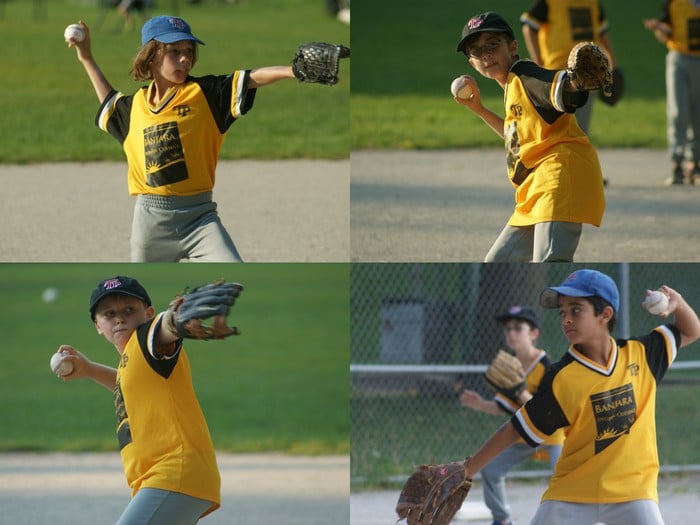 Sailing amidst the calm waters of Bickford Park Bay this evening, the swashbuckling Pirates seized control of the mizzenmast and duly dispatched of the Go Go Lizzies in 9-6 fashion in 3 ½ innings of intense Mosquito Division seafaring action.

The gnarly Buccaneers were full measure for their win as they used a combination of strong pitching, opportune offense, and timely defense to wrest the gold doubloons of sweet victory away from the landlubbing Lizzies.

In the top of the first, the Lizzies entered the Pirates lair and scored two runs to jump into an early 2-0 lead. With one out and the bases juiced, Simon (10) drew a bases loaded walk to bring in Kyle (15) with the first run of the game. With two outs and the bases loaded, Jeremy (8) hit a RBI single to bring Ronald (13) home.

The Pirates answered back in seadog fashion in the bottom of the first with four runs to surge ahead 4-2. The Bucs made of the most of the six walks and a hit batsman that was issued to them by the Lizzies.

The Lizzies scored one run in the top of the second to trim the deficit to one. With two outs, Dylan (1) delivered a clutch RBI single to bring in Kyle (15).

In the bottom of the second, the Pirates scored a run in jolly roger style to increase their lead to 5-3. After Quinn (12) had led off the inning with a walk, he daringly stole two bases to reach third. Unbeknownst to the Lizzies defense, The Mighty Quinn made a swabbie dash to steal home and successfully slid into home plate in a cloud of dust to score a run.

The Lizzies responded with two runs in the top of the third to tie the game 5-5. With one out, Cameron (3) drew a bases loaded walk to bring in Simon (10) from third. Kyle followed with a RBI double to bring Mitchell (9) home.

However, the Pirates took advantage of five consecutive walks in the bottom half of the third to score four runs to catapult themselves into a 9-5 lead. The Lizzies also helped out the Buccaneers cause through a series of errors and wild pitches.

Although he gave up a run to the Lizzies, Pirates southpaw closer Jian (4) sealed the deal for the Bucs in top of the fourth with two strikeouts.