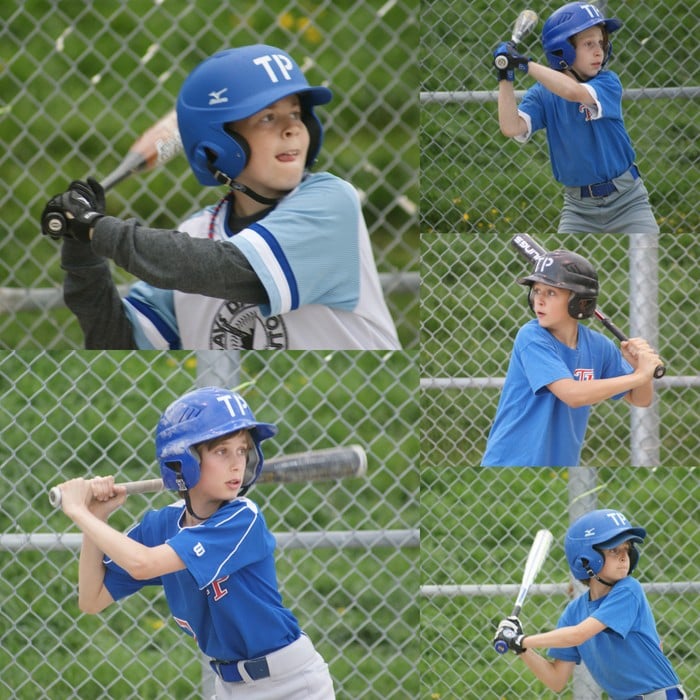 Beneath overcast skies at Christie Pits Diamond 2 this evening, our Major and Minor Peewee Select Teams opened their respective regular season’s by playing to an 8-8 draw over the course of four exciting innings of EBA West Select Loop action.

Trailing 8-6 in the bottom of the fourth, the Major Peewee Selects rallied in dramatic fashion with two runs to tie the proceedings. With one out, Simon (5) singled and stole second. Nathan (0) followed with a RBI single that brought Simon home to trim the deficit to one. 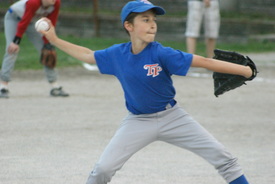 With two outs, Tyler (00) singled to put runners aboard at second and first. At this juncture, Jack (3) delivered a grace under pressure RBI single that allowed Nathan to motor home with the tying run.

With Tyler, representing the Major Peewee Selects go ahead (and winning) run, standing only 75 feet away at third base, Elena (19) powered a deep fly ball to centre field. However, Minor Peewee centre fielder Owen (18) made a dramatic shoestring catch in the ambient lit bowels of centre to bring the game to a fitting close.

The Minor Peewee Selects jumped out to an early 1-0 lead in the top of the first. Zack (32) led off the inning with a single and eventually came into score after a pair of wild pitches. However, Major Peewee starter Simon (5) eventually found his groove as he struck out three Minor Peewee batters to leave the bases loaded.

In the bottom of the first, the Major Peewees answered back with vengeance as they scored four to blaze ahead 4-1. Simon powered an one out RBI double to deep left field that allowed leadoff batter Ben (4) to come homeward bound with the tying run.

With two outs, Jamie (007) stroked a clutch RBI single that allowed Simon to scoot home with the go ahead run. After a walk to Tyler, Jack hit a RBI single that brought Jamie home. A subsequent error by the Minor Peewee catcher allowed Tyler to zoom in the Major Peewees fourth run.

Nathan of the Peewee Majors went 2 for 3 at the dish with 3 RBIs.

Taking advantage of two walks, four hits and an error, the Minor Peewees made the most of their opportunities in the top of the second as they sent twelve batters to the plate and scored seven runs to retake the lead 8-4. Keying the offensive charge was RBI efforts from Zack, Arlo (7), Sasha (13), Cam (6) and Lucas (10) with a 2 RBI double.

Shaken, but not stirred, the Major Peewees charged back with two runs in the bottom of the second to trim the deficit to two. With two runners on base, Nathan delivered a clutch 2 RBI double that brought Magnus (000) and Simon homeward bound.

The respective relief pitchers of both teams took charge of the game in the next 1½ innings as Major Peewee reliever Ben (4) and Minor Peewee reliever Max (7) took turns keeping each side off the scoring ledger.

Down 8-6, it was at this point in the game (in the bottom of the fourth inning) where the Major Peewees took their swings in the on deck circle and awaited their moment with destiny.

The Major Peewee Selects (0-0-1) hit the road next week as they travel to Ravina Gardens on Wednesday, May 15 to play Annette at 6:30 p.m.