THE COACHES, PARENTS & PLAYERS ON OUR MAJOR PEEWEE SELECT TEAM STEPPED UP TO THE PLATE TO PERFORM SOME MIRACULOUS GROUNDSKEEPING ON A RAIN DRENCHED DIAMOND AT CHRISTIE PITS IN ORDER TO GET THE FIELD IN TIP TOP SHAPE FOR THEIR GAME AGAINST MARTINGROVE 1 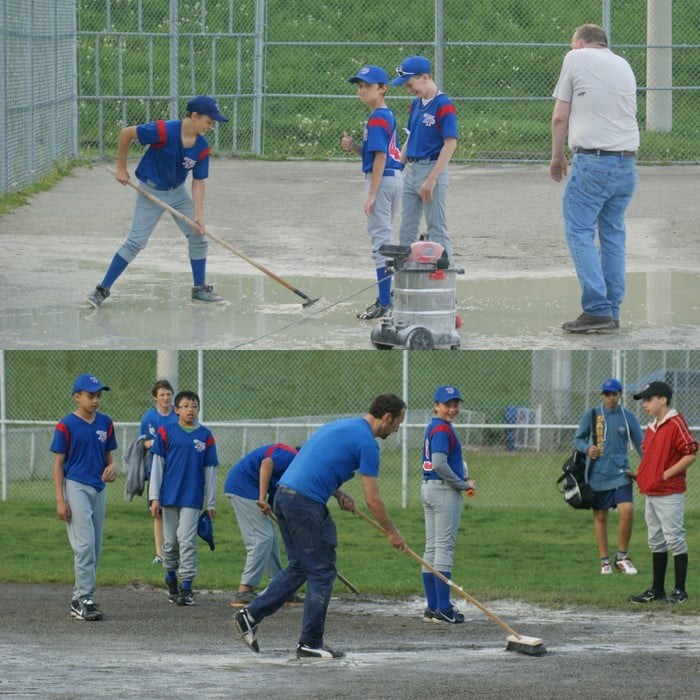 Using everything but the kitchen sink, Coaches, Parents and Players from the Major Peewee Selects defied the odds and Mother Nature and succeeded in their efforts to remove the pools of water from Christie Pits Diamond 2 in order to play their game against Martingrove 1.

A heavy thunderstorm this evening at Christie Pits had left areas of the Diamond 2 playing surface beneath huge pools of water and threatened to cancel the EBA West Select Loop game between the TP Major Peewee Selects and the Martingrove 1 White Sox.

However, with only an hour and fifteen minutes before the scheduled game time, Major Peewee Select Head Coach Rob Ball refused to wave the white flag of surrender as he led his team in a focused groundskeeping operation comparable to Operation Desert Storm to get the field as dry as possible.

With no guarantee of success and for the love of the game, Coaches, Players and Parents on the Major Peewee squad banded together and used brooms, buckets, rakes, squeegees, wheelbarrows, and an electric Shop Vac industrial vacuum cleaner to remove the deep pools of water from the diamond surface.

With a little time to spare, the Major Peewee Selects succeeded in their quest and the game against the White Sox proceeded only eleven minutes behind schedule.