BENEATH SUNNY SKIES AT CHRISTIE PITS, PLAYERS & PARENTS CAME OUT IN LARGE NUMBERS TO PARTAKE IN THE VARIOUS BASEBALL CLINICS HELD TO COMMEMORATE THE CENTENNIAL YEAR OF AMATEUR BASEBALL IN THE CITY OF TORONTO 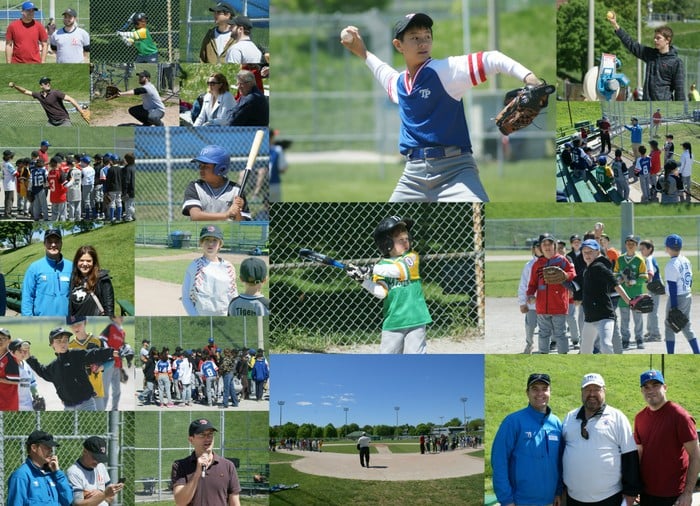 The verdict: A rip roarin’ success!

Many of the players registered with our House League Baseball program came out in record numbers to participate in the various skill clinics that were scheduled.

Rookie Ball players in our Wednesday division had an opportunity to hone their hitting skills on our new JUGS pitching machine at Diamond 3. The pitching machine (affectionately nicknamed “Fergie”) was financed from the money raised from last fall’s Derby For Distance Event.

A record number of players in our Mosquito Division took part in the Pitching Clinic held at Diamond 2. Helmed by TP Committee Member Alex Beauvais, the players were given hands on instruction on proper pitching mechanics and pick off moves.

A special ceremony was held at Dominico Field at Christie Pits, to not only celebrate the start of our 2013 season, but also to commemorate the 100th Year of Amateur Baseball in the City of Toronto.

Toronto Baseball Association President Dave Black and TP Baseball President Bill Evans addressed the many players and parents who were lined up on the foul lines at Dominico Field.

To inaugurate the start of our House League Season, Toronto City Councillor Mike Layton (Trinity-Spadina) threw out the ceremonial first pitch (before the scheduled Bantam Division Opening Day game between the Lizzies & White Sox) to our TP Baseball Coordinator Steve Smith, who was behind home plate.

Additionally, parents and players in attendance also enjoyed the cookies, hot dogs, veggie dogs, snacks and drinks that were served up in our barbecue area.

On top of that, TP Baseball also raised funds by raffling off a pair of Toronto Blue Jays Tickets. The winning number is 984738. The holder of the winning ticket can contact Bill Evans at [email protected] to claim their prize.