DOWN 10-8, THE LIZZIES SURGED BACK WITH FOUR RUNS IN THE FOURTH INNING TO USURP THE WHITE SOX AT DOMINICO FIELD TO WIN THEIR BANTAM DIVISION SEASON OPENER 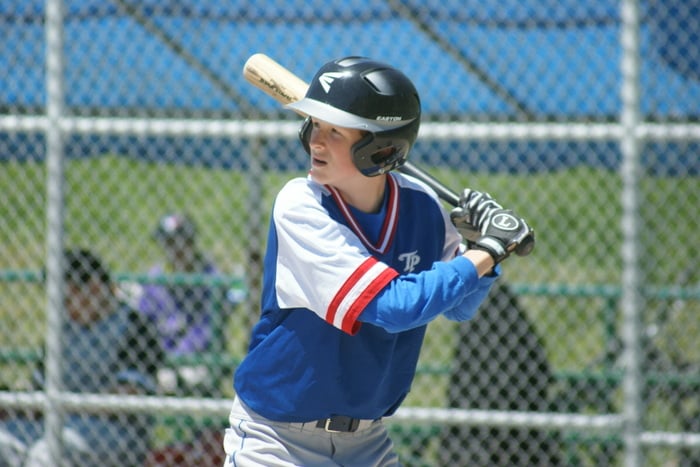 With the bases loaded and one out in the bottom of the fourth, Sam (14) powered a clutch 2 RBI double that brought home the tying and winning runs for the Lizzies. In three plate appearances, Sam went 2 for 2 (single, double) with a walk; two runs scored and 3 RBI’s.

Under beautiful blue skies at Dominico Field at Christie Pits this afternoon, the Lizzies prevailed over the White Sox 12-10 in an entertaining 4 ½ innings to win their Bantam Division Season Opener. 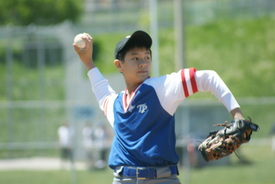 In a rematch of last season’s Bantam Championship Game, the reigning champion Lizzies rallied for four runs in the bottom to the fourth to seize the gold doubloons of victory.

Trailing 10-9, with no outs and the bases loaded, Sam (14) of the Lizzies powered a clutch 2 RBI double to the outfield that brought Jacob (6) and Victor (7) home with the tying and winning runs. A wild pitch by the White Sox allowed Roberto (11) to motor home with an insurance run.

Leading 12-10, Lizzies closer Evan (13) retired the White Sox in 1-2-3 fashion in the top of the fifth with one strikeout to seal the deal and the victory.

Utilizing three hits and a walk, the White Sox scored four in the top of the first and jumped out to an early 4-0 lead. Taking advantage of some passed balls and wild pitches by the Lizzies, Adamo (12), Agostino (7), Leo (9) and Jack (6) utilized their speed to come homeward bound.

However, the Lizzies answered back in the same fashion to score four in the bottom of the first to even the proceedings 4-4. Making a meal out an error and a series of walks and wild pitches by the White Sox, Sam, Carlos (15), Reid (8) and Natan (10) were able to motor home in unbridled fashion. 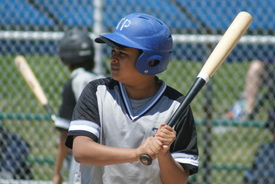 In two at bats, Sajith (3) of the White Sox stroked two sacrifice hits to earn 2 RBI’s

The White Sox scored two in the top of the second to retake the lead 6-4. A one out RBI sacrifice hit by Sajith (3) allowed Eamonn (5) to zoom home with the go ahead run. With two outs, Chaewon (14) hit a RBI that delivered Taarak (8) home.

In the bottom of the third, White Sox reliever Jack (6) pitched a scoreless 1-2-3 inning with one strikeout. The defensive highlight was a super deep fly ball catch corralled by White Sox centrefielder Chaewon off the bat of Lizzies batter Wyeth (5).

Exercising discipline at the dish in the top of the third, the White Sox parlayed four walks and an error into four runs to surge ahead 10-4.

But the Go Go Lizzies came back with a vengeance in their half of the third with four runs of their own to trim the margin to 10-8 by making the most of four singles and a walk. Keying the uprising were key RBI singles by Sam and Natan (10).

Lizzies reliever Victor (7) threw a scoreless 1-2-3 inning with two  in the top of the fourth to keep the potent White Sox off the scoresheet.

Down 10-8, Wyeth of the Lizzies singled to lead off the bottom of the fourth. Wyeth reached third on a pair of stolen bases and came zooming home with a run on a wild pitch to trim the deficit to one. With no outs, Jacob and Victor delivered a pair of singles and Roberto (11) followed with a walk to load the bases.

It was at this juncture in the proceedings where Sam stood bat in hand in the batter’s box at Dominico Field and looked into the blue horizon beyond the chain linked outfield fence and came face to face with his moment with destiny.