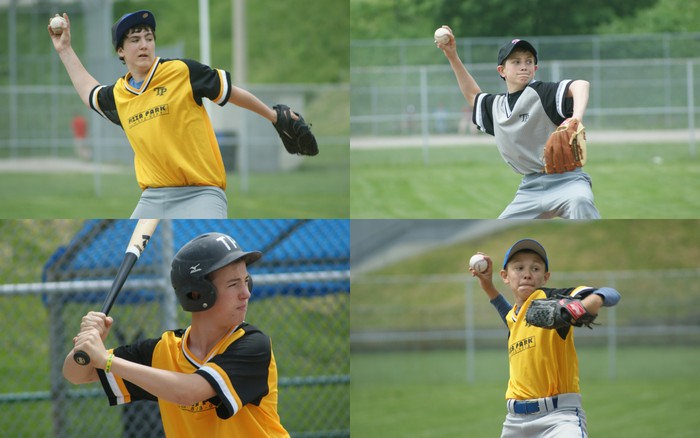 Clockwise from top left: A’s reliever Sam (13) threw a scoreless second inning where he struck out three White Sox; White Sox reliever Agostino (2) threw two solid innings where he allowed only two runs while mowing down four A’s; A’s starter Keegan (2) threw a 1-2-3 first inning where he srtuck out two; Micah (10) of the A’s went 3 for 4 at the plate 3 runs scored and a RBI. Micah also closed out the game in the fifth by striking out three White Sox in order to seal the deal on the win.

Beneath hazy skies at Dominico Field at Christie Pits this afternoon, the A’s defeated the White Sox 14-8 in five innings of Bantam Division action.

Using a combination of strong pitching and offense, the Athletics led the game from wire to wire. 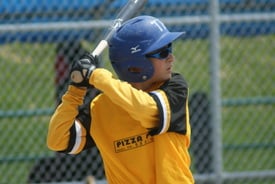 In four plate appearances, Adam (8) of the A’s went 3 for 4 with two runs scored and an RBI.

The A’s made the most of their opportunities in the top of the first as they scored four to jump out to a 4-0 lead. With one out and Clyde (11) at third, Micah stroked a RBI single to bring him home with the game’s first run. After a pair of stolen bases, Micah came home on a wild pitch. With two outs, Avery (3) and Adam (8) respectively reached base on an error and a single. Both came into score after a series of wild pitches by the White Sox.

A’s starting pitcher Keegan (2) pitched an economical 1-2-3 bottom of the first in keeping the White Sox off the scoresheet with two strikeouts.

In the top of the second, the Athletics added four more to widen their lead to 8-0. With one out, Sam (13) and Micah respectively reached base on an error and single. Subsequent defensive miscues by the White Sox allowed both to score. After Keegan drew a walk, Avery stroked a RBI double to bring him home. Adam followed with a RBI single to bring home Avery with the inning’s final run.

A’s reliever struck out three White Sox in the bottom half of the second to keep them off the scoring ledger. 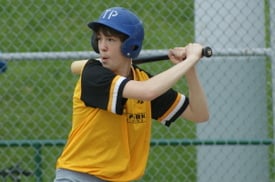 In four appearances at the dish, Avery (3) of the A’s went 1 for 2 (double, two walks, reached base on an error) while scoring four runs and an RBI.

White Sox reliever Agostino (2) kept the Athletics off the scoreboard in the top of the third with a solid two strikeout effort.

The White Sox offense finally came alive in the bottom of the third as they scored four to trim the margin to 8-4. Taarak (3) and Eamonn (6) led off the inning with a pair of walks. Taarak came motoring home on a wild pitch for the White Sox’s first run. Jack (1) delivered a RBI sacrifice hit to score Eamonn. With one out, Agostino and Adamo (14) drew a respective walks and both came home after a series of errors by the A’s.

In the top of the fourth, the A’s responded with two to stretch their lead to 10-4. With one out, Keegan and Avery drew back to back walks and both came homeward bound after some stolen bases and wild pitches by the White Sox.

The White Sox answered back with four in the bottom of the fourth to trim the deficit to 10-8. Gil Bok (10) and Sajith (8) drew walks to lead off the inning. After a series of stolen bases, Gil Bok came home on a wild pitch. Subsequently, with one out, Eamonn singled and Jack drew a walk to load the bases. Agostino followed with a RBI single to bring Sajith home. With two outs, Jack came sliding home on a A’s wild pitch. A RBI single by Marco (13) allowed Agostino to motor home with the inning’s final run.

However, the Athletics responded to the White Sox rally by adding four insurance runs in the top half of the fifth to widen their advantage to 14-8.

In the bottom of the fifth,  A’s closer Micah (10) icily struck out three White Sox in 1-2-3 fashion to seal the deal and the victory.