FIRING ON ALL CYLINDERS, TORONTO PLAYGROUNDS WINS ITS FIRST GAME OF THE EBA WEST SELECT LOOP SEASON IN A TOTAL TEAM EFFORT AT CHRISTIE PITS 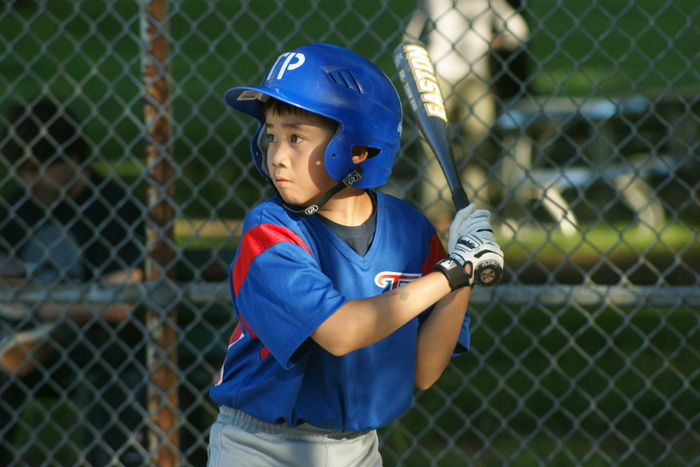 With the bases loaded, Colby (28) stroked a RBI single in the fourth inning to bring Dexter (4) home from third base with the TP Rookie Ball Selects winning run.

Beneath warm and beautiful skies this evening at Christie Pits Diamond 3, our TP Rookie Ball Selects defeated the Annette A’s 10-4 in a historic 5 ½ inning battle to win their first game of the EBA West Select Loop season. 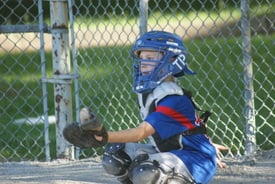 A focused and determined Toronto Playgrounds team was firing on all cylinders both offensively and defensively as they took no prisoners in their quest to attain victory.

The Rookie Ball Selects pounded out a unrelenting twenty-one hit attack against Annette (19 singles & two doubles). Additionally, TP exercised great discipline at the plate as they had four sacrifice hits to cash in baserunners in scoring position.

A glance at the postgame scoresheet showed that the victory was a TOTAL team effort as ALL thirteen players pencilled into the Rookie Ball Select batting lineup collected a hit during the proceedings.

TP also played one of their most solid games defensively this season. All throughout the game, time and time again, a Rookie Ball Select player stepped up to make a big defensive play when necessary to stifle the Annette offensive attack.

Not only was this sweet victory the first 2013 regular season win for the Rookie Ball Selects, but it was also a ‘historic’ first win by any TP Rookie Ball Select team since the TP Baseball Committee revived the program back on August 5, 2011 (https://torontoplaygrounds.ca/2011/08/06/tp-select-rookie-ball-selects-do-us-proud-at-weekend-to-strike-out-cancer-tournament/). 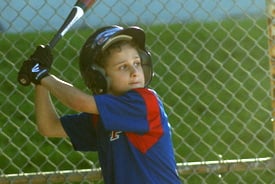 In the top of the first, Annette was unable to put a mark on the scoring ledger. The highlight of the inning was a nice defensive play made by TP pitcher Emmett (3). With two outs and Annette baserunner Sawyer (3) at first, Emmett deftly corralled a hot shot off the bat of Morgan (14) of the A’s and cooly made the precision throw to second to record the third out.

The TP bats went into high gear in the bottom of the first as they parlayed six hits and two sacrifice hits into an early 4-0 lead. After Oskar (6) and Hassan (9) had both singled to lead off the inning, Ishan (19) powered a RBI double to score Oskar with the first run of the game.

Both Annette and Toronto Playgrounds were unable to score any runs in the second and third innings. However, the TP defense continued to shine with some big plays. TP second baseman Dexter made a super catch off the bat of Noah (8) of the A’s to record the third out of the second inning.

In the third inning, TP second baseman Jacob (7) vacuumed up a hot shot off the bat of Luke (1) of the A’s and made a laser throw to first baseman Ishan to record a Gold Glove 4-3 putout.

Refusing to wave the white flag of surrender, Annette gamely battled back with three in the top of the fourth to whittle the Rookie Ball Selects lead to 4-3. 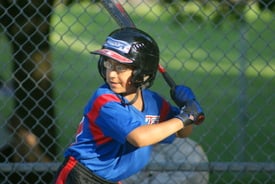 The defensive highlight of the inning was an unassisted putout made by TP catcher Eli (22). With no outs and the bases loaded, Eli deftly retrieved a nubbler in front of the plate off the bat of Noah (2) of the A’s and had the wherewithal to hustle back into position and apply the tag on Morgan of the A’s who was dead on arrival at home plate to record the first out of the inning.

However, Toronto Playgrounds answered back with authority in the bottom half of the fourth as they pounded out seven hits and two sacrifice hits to score five runs and stretch their advantage to 9-3.

Dexter, Emmett (3) and James (35) respectively singled to lead off the inning and load the bases. Colby (28) followed with a clutch RBI single to bring Dexter home with what would turn into TP’s eventual winning run. Declan (13) delivered a RBI single to deliver Emmett home.

Annette scored one in the top of the fifth to trim the deficit to five.

TP scored another insurance run in the bottom of the fifth to extend their lead 10-4. After Luca (11) had stroked a one out single, Spencer (15) followed with a RBI double to bring him home.

In the top of the sixth, the Rookie Selects made another big defensive play to close out the game. With one out and Eric (4) of Annette at second base, Luke (1) of the A’s hit a screaming line drive up the middle. Before the ball could hit the ground, Ishan hit the dirt and made a spectacular catch behind second. Then Ishan quickly got up and stepped on second to record the putout on the wayfaring Eric. A chitty chitty bang bang unassisted double play to end the game.

The Rookie Ball Selects (1-3) play their next game at home when they host Martingrove at Christie Pits Diamond 3 on Tuesday, June 18 at 6:30 p.m.