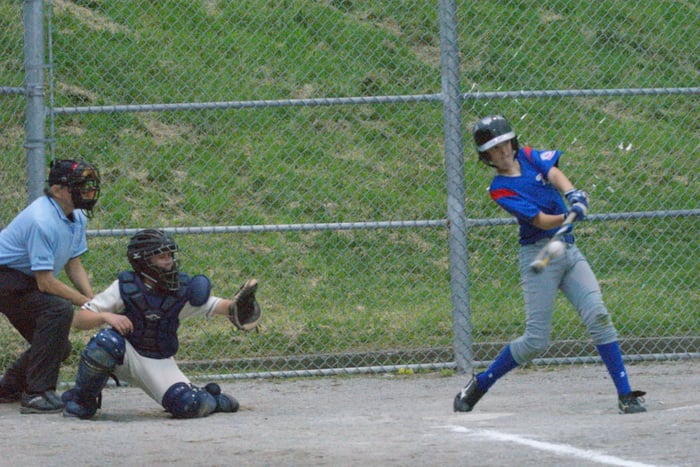 POINT OF IMPACT > With Umpire Ted Sharp and Bloordale catcher Christopher (32) looking on, Sasha (28) of the TP Minor Peewee Selects powered a triple to deep centre field in the second inning at Christie Pits Diamond 2.

The Bombers offensive machine was in high octane as they parlayed ten hits and ten walks in the first three innings into sixteen runs. It was one of those games where Bloordale had left Toronto Playgrounds in the dust and never had to look back in the rear view mirror.

And now a word from our sponsor.

Bloordale jumped into an early 3-0 lead in the top of the first. However, TP starting pitcher Sasha (28) doggedly kept his team in the game with a resilient three strikeout effort.

With the Minor Peewees going down 1-2-3 in the bottom of the first, the Bombers put the pedal to metal in the top half of the second when they scored eight runs to extend their advantage to 11-0.

Toronto Playgrounds answered back with one run in the bottom of the second to trim the deficit to ten. After Sasha had led off the inning with a powering triple to the deep dish pizza realms of centrefield, Brian (25) delivered a one out RBI sacrifice hit to bring Sasha home with the Minor Peewees first run of the game.

However, the Bombers replied with another five insurance runs in the top of the third to stretch their lead to 16-1.

The TP offense came to life in the bottom of the third as they took advantage of tiring Bloordale starter Kieran (10) to score five runs and trail 16-6.

Backed by some solid defensive play from his teammates, TP reliever Angus (45) pitched a scoreless top of the fourth.

TP scored one in the bottom of the fourth to trim the margin to 16-7. After Brian (25) had stroked a one out single, Jacob (2) delivered him home with a clutch two out RBI single.

The Minor Peewee Selects (2-3-1) head off to the Georgetown Tournament for their next series of games on June 21-22. They resume their EBA West Select Loop regular season on Wednesday, June 26 when they travel to Pelmo Park to play Weston at 7:00 p.m.