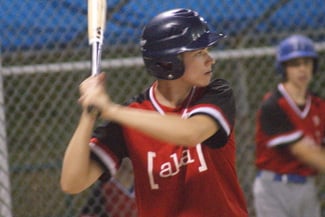 Joel (15) went 4 for 4 at the plate with three runs scored to power the Monarchs to a Game 3 victory over the Crawfords at Dominico Field.

Under sunny and breezy skies this afternoon at Dominico Field at Christie Pits, the Monarchs defeated the Crawfords 11-8 in six innings of Midget Division Championship Series action.

With their hard fought Game 3 victory, the Monarchs take a 3-0 stranglehold in their best of seven championship series over the reigning Midget Division Champions.