FIRING ON ALL CYLINDERS, THE WHITE SOX CRUISE TO A VICTORY OVER TORONTO PLAYGROUNDS AT CHRISTIE PITS 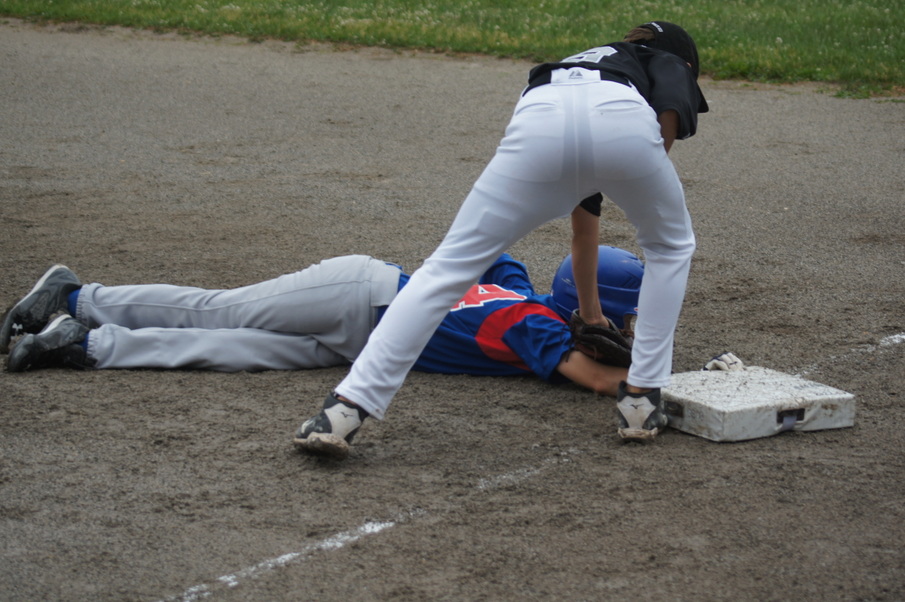 On a pickoff attempt during the second inning, Oliver (24) of Toronto Playgrounds dives safely back into first base before Martingrove White Sox first baseman Joseph (6) can apply the tag.

Martingrove used a formula of solid pitching and a patient and opportunistic offense to cruise to a dominating victory over TP. Four White Sox pitchers combined to strike out nine TP batters while limiting the Minor Peewee offense to four hits and two walks over four frames.

Meanwhile, the White Sox offense took no prisoners as they took advantage of thirteen walks and ten hits to pound Toronto Playgrounds.

However, the Minor Peewee Selects kept their composure as they remained resilient throughout  the proceedings and continued to battle Martingrove right to the end.

The White Sox sent twelve batters to the plate in the top if the first as they parlayed two walks and five hits into an early 7-0 lead. Martingrove’s big blow was Joseph’s (6) a majestic three run home run blast that easily sailed over the left field fence.

Despite the onslaught. TP starter Oliver (24) hung tough as he gamely struck out two White Sox batters and closed out the inning by inducing Martingrove to hit into a fielder’s choice.

In the bottom of the first, Martingrove starter Joseph (6) mowed down a pair to keep TP off the scoring ledger.

Martingrove added two runs in the top of the second to widen their advantage to 9-0. TP reliever Kyle (55) struck out one to hold the potent White Sox offense in check.

TP executed a nice 9-3 defensive putout for the first out of the inning. After corralling a hard hit ball off the bat of Stephen (4), left fielder Elena (17) made a laser throw to first baseman Piper (9) to record the out on Stephen on a close play at first.

White Sox reliever Jonathan (14) fanned three Minor Peewees in the bottom of the second to keep TP off the scoring abacus.

Going for the jugular, Martingrove made hay of six walks in the top of the third to score five runs and stretch their lead to 14-0. The big hit came from White Sox big bopper Joseph, who stroked a two RBI single.

After entering the game, TP reliever Charley (13) icily quelled the White Sox insurgency by striking out one and inducing two pop ups to close out the inning.

The dormant Minor Peewee offense surged to life in electrifying fashion in the bottom of the third as they scored five to trim the deficit to nine. After Flynn (21) walked and Ethan (19) singled to lead off the inning to put two TP runners on base at second and first, Flynn made a brazen dash for third. However, the throw from White Sox catcher Justin S. (7) sailed high and down the third baseline, which allowed Flynn to motor home with TP’s first run of the game.

With one out, Charley delivered a RBI single which brought Ethan home. Subsequently, Charley would come homeward with TP’s third run on a dropped third strike to Elena, who beat the throw to first.

After Piper was hit by a pitch to put a pair of TP runners on base, Kyle would deliver a two RBI single that would bring Elena and Piper homeward.

However, the White Sox would answer back with five insurance runs in the top of the fourth to lengthen their lead to 19-5. Martingrove’s Joseph powered a two RBI double to key the White Sox assault.

White Sox reliever Matthew Y. (12) would mow down two TP batters in the bottom of the fourth to seal the deal on well deserved victory.