TAKING NO PRISONERS AND UNLEASHING A FURIOUS THIRTY-ONE HIT ATTACK , TORONTO PLAYGROUNDS CRUISES TO A VICTORY OVER THE A’s AT CHRISTIE PITS AND THEIR FIFTH WIN OF THE EBA SELECT SEASON 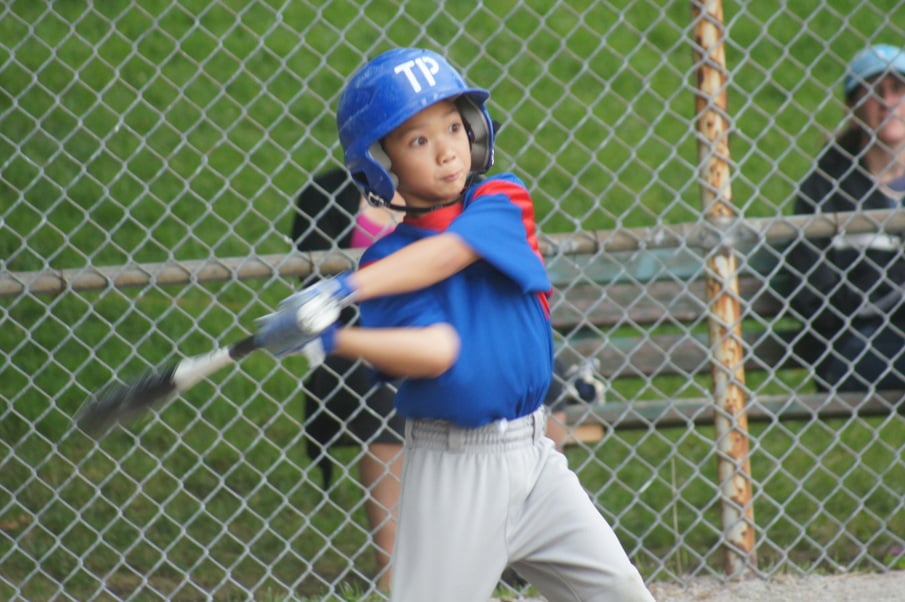 In his Rookie Ball Select debut, Jordan L. (10) [a call up from the House League ‘Lions’] sparked the TP offense by going 4 for 4 [double, three singles] at the plate with three runs scored and 2 RBI’s.

TP snapped a two game losing string with aplomb as they took no prisoners and pounded out thirty-one hits against Annette to cruise to their fifth EBA Select victory of the season. Firing on all cylinders, the Rookie Ball Selects played their best game in weeks as everyone in the batting lineup made a contribution by scoring a run.

And it wasn’t just the offense that was highlight of the proceedings. TP also played some solid defense to stymie the A’s at crucial junctures during the game to take away momentum from their opponent. 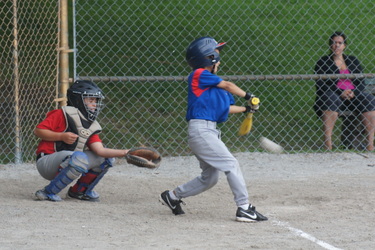 Ronin (4) muscles a 2 RBI double in the second inning to put TP on the scoreboard. Ronin went 4 for 4 [two doubles, two singles] with a run scored and 4 RBI’s.

With both teams unable to generate any scoring in the first 1 ½ innings of the game, it took until the bottom of the second before TP scored a pair to jump out to a 2-0 lead. With one out, Jordan L. (10) doubled and Noah (4) singled to put two runners on base. Ronin (4) followed with a grace under pressure two RBI double that allowed Jordan and Noah to motor homeward.

With Annette unable to score in the top half of the third, TP exploded for six runs in the bottom half of the frame to extend their lead to 8-0. With two outs and a pair of TP runners on base, Theo (17) delivered a clutch two RBI single that allowed Jesse (9) and Zev (19) to speed home.

After a single by Lewis (13) put two runners on base, Solomon (23) followed with another single. However, the A’s committed a throwing error on the play that allowed each runner to move up a base and that opened the door for Theo to shimmy home. Jordan, Noah and Ronin would follow with consecutive RBI singles that plated Lewis, Solomon and Jordan.

TP utilized some stellar defense to keep Annette off the scoring ledger in the top of the fourth. Second baseman Zev and first baseman Solomon turned a nifty pair of 4-3 putouts to record the first two outs of the inning.

The Rookie Ball Selects tacked on another three runs in the bottom of the fourth to stretch their advantage to 11-0. After a leadoff double by Jordan W. (1), Vincent stroked a RBI double to bring Jordan home. With one out, Zev would hit a RBI single that brought Vincent homeward.

After a two out double by Charlie (7), Theo would follow with a RBI single to score Charlie.

Annette scored two in the top of the fifth to trim the deficit to nine. With two outs and an A’s runner on base, Marco (12) would power a RBI triple to plate Jenny (7). Sam (1) would follow with a RBI triple that scored Marco.

With authority, Toronto Playgrounds would answer back with seven insurance runs in the bottom of the fifth to increase their lead to 18-2. With Solomon on base after a leadoff hit, Jordan L. would deliver a RBI single to bring Solomon home with the first run of the frame. After a Noah single put two TP runners on board, Ronin would stroke a RBI double to plate Jordan.

Cooper (27) would follow with a two RBI double that brought Noah and Ronin homeward bound. After a single by Jordan W. put two runners on base, Vincent would hit into a fielder’s choice that erased Jordan W. and scored Cooper. 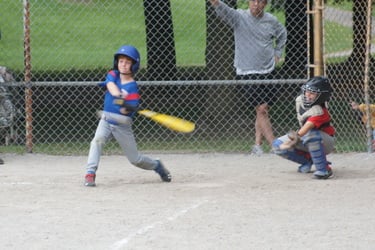 Theo (17) is poised to deliver a RBI single in TP’s seven run explosion in the fifth inning. Theo went 4 for 4 at the plate with a run scored and 4 RBI’s.

After a one out single by Jesse put two TP runners on base, Charlie would deliver a clutch two out RBI single that brought Vincent home with TP’s sixth run of the inning. Theo would follow with a RBI single that scored Charlie and close out the scoring in the fifth inning.

TP would use some solid defensive play in the top of the sixth to turn back a late charge by the Annette offense. Second baseman Cooper made a Gold Glove play by sucking up a slow grounder like a Kirby vacuum cleaner and making a laser throw to first baseman Solomon to record a razor’s edge 4-3 putout on Colin (3)  of the A’s for the first out of the inning.

With one out and Annette base runners at second and first, Andreu (2) hit an eight mile high pop up to the first base side of the diamond. Battling the darkness of the overcast and cloudy skies above him, TP first baseman Solomon corralled the ball in the shoestrings of his glove to record the second out. Noticing that the A’s base runner had wandered afar from first, Solomon had a the baseball wherewithal to hustle over to the base and step on the bag to complete the unassisted double play to end the inning.

In the bottom of the sixth, TP tacked on another run for good measure and widen their advantage to 19-2. After a leadoff single by Lewis, Jordan stroked a one out RBI single to bring Lewis home with TP’s final run of the game.

And in a valiant last gasp, Annette went down swinging in the top of the seventh.

“Fantastic game tonight. This was very nice to see after a couple of tough losses. The players put on a show defensively and offensively. Over thirty hits from up and down the order – crazy! Theo and Ronin both knocked in four RBI’s and Cooper had three RBI’s. And how about Jordon L. – who made his Select debut with us tonight from House League – he went 4 for 4 with 2 RBIs. We’re going to see a lot more from him. This kind of effort makes me very excited for the playoffs in a couple of weeks.”

The Rookie Ball Selects (5-6) travel to Neilson Park to play their next EBA Select game against the Bloordale Bombers on Wednesday, August 5 at 6:30 p.m.