IN A BARNBURNER, THE GO GO LIZZIES HANG ON FOR A THRILLING VICTORY OVER THE GNARLY BUCCANEERS AT BICKFORD PARK 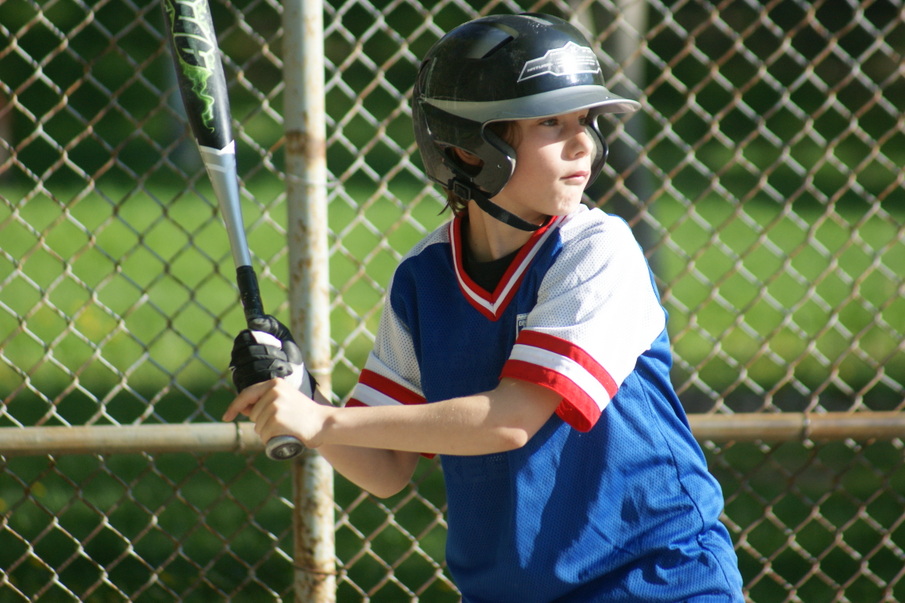 THE MIGHTY QUINN: Quinn (14) delivered a clutch 2 RBI triple in the third inning and later stole home to help lead the Lizzies to an 11-10 win over the Pirates at Bickford Park. Quinn also pitched a scoreless first inning against the Bucs.

Beneath a blanket of picture perfect summer skies on the final day of July, the Lizzies edged the Pirates 11-10 in a thrilling 3½ innings of Mosquito Division action this evening at the Bickford Park South Diamond.

It was an entertaining seesaw battle between two talented and well coached teams.

Trailing 11-8, the never say die Pirates gamely rallied for two in the top of the fourth to trim the deficit to one. With two outs and the game on the line, Lizzies closer Sam (8) induced the final Pirates batter to hit an eight mile high fly ball to Lewis (10), who battled the glare of the sun to make a nice game ending catch in the shoestrings of his glove to seal the deal on a hard fought victory over a gallant opponent.

Leading the Lizzies effort on the field was Quinn (14), who pitched a scoreless first inning against the Bucs. The ‘Mighty’ Quinn also delivered a clutch two RBI triple in the third, then later stole home.

Here is a bonus game summary of the Lizzies-Pirates proceedings courtesy of the Pirates:

Despite some great hitting and fielding, the Pirates came up just short against a solid Lizzies team, falling 11-10 in 3½ innings at Bickford Park.

Highlights of the game for the Pirates included a double play in the second inning and an RBI double in the third inning.

After being blanked in the top of the first inning, the Pirates found their offensive groove in the second, scoring four runs on a series of walks and stolen bases. Jasper (11) stole second and third before scoring. Ella (8) stole second before coming home to score. Oscar (1) and Jeremy (4) also scored runs.

Charlie (3) pitched the bottom of the first, registering a strikeout and throwing with his usual force.  Mark (12)  pitched the bottom of the second, also registering a K, and allowing just three runs.  The play of the game for the Pirates came when a pop fly hit toward second by a Lizzies batter. Ella tracked the ball down and then caught it. But the play wasn’t over. Ella fired the ball to Jeremy at first, and a Lizzies runner caught out of position was out. Score it as a 4-3 double-play for the Pirates!

The red-hot offense continued in the third inning, with another four runs scored. Again, Pirate batters were cagey at the plate, drawing walks. Charlie blasted a double that scored Mark. Ella and Oscar scored later in the third. Andre (15) brought a runner home with a walk.

Will pitched the bottom of the third, and notched another K. He also shared an out with Alexia, scooping up a ground ball hit to the mound, throwing to Alexia, who caught the ball and slapped the first base bag with her glove to make the out.

The Pirates entered the fourth down 11-8. The inning got off to a promising start, with Mark walking, and Will (13) and Olivia (6) hitting singles. Olivia just beat out the throw, touching the bag at blazing speed and – just as coaches have been urging all season long – not slowing down a bit as she approached the bag. But then the Lizzies threw a runner out at second and struck a batter out.

With two down, Jeremy came to the plate. Switch-hitting number 4 was hitting from the left side of the plate, and drove a solid fly ball to the area of third base. Alas, the Lizzies third basemen made the catch, and the Pirates rally had fallen a run short.